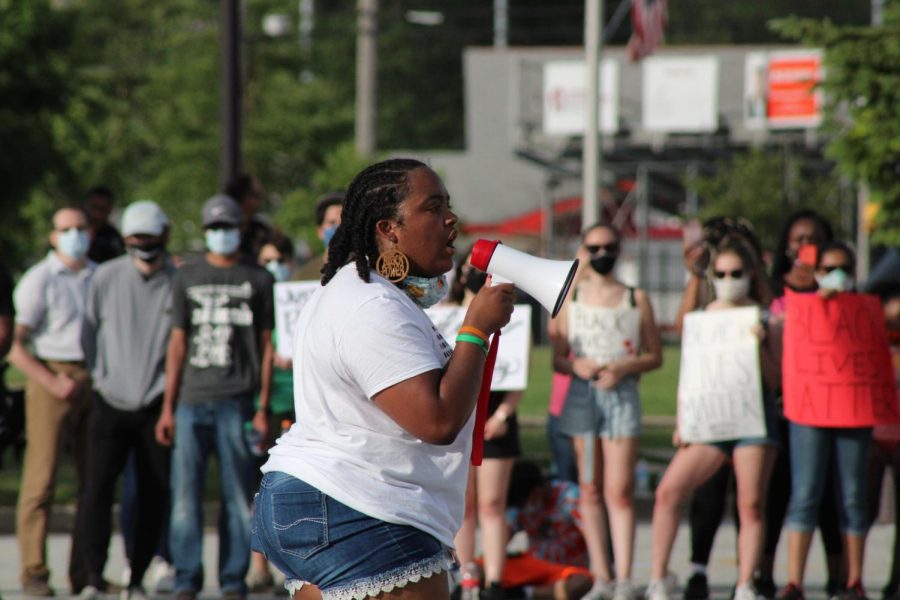 More than a movement

Students speak on Black Lives matter and against racial discrimination

A sea of masked faces populate the street of Columbia Avenue. Signs are held firmly in the air, bearing phrases such as “neutrality equals oppression” and “justice for George Floyd.” The crowd drifts apart to form a circular opening. A person (someone from protest) stands in the midst,
megaphone in hand. The crowd, though remaining distanced and masked, stands in solidarity to listen.

“The main takeaway that I had from the protest is that people care,” Kayla Prowell, class of ‘20, said. “I hope that people can take away that this isn’t over. This isn’t something that happened once, and just because the news stopped covering it, it’s done. People are still out there marching and putting their lives at risk to try and ensure that other people aren’t going to lose their lives just for the way they look.”

Ever since the graphic video of George Floyd’s death at  the hands of police in late May was released, outbursts of protest online and in streets became intensely prominent. Though the Black Lives Matter movement was initiated in 2013 in light of the killing of 17-year-old Trayvon Martin, the new resurgence of this year has seen more allyship and support from other groups than before.

“This past June, I attended my first BLM protest in Lansing, Illinois,” Laura Marguia, junior, said. “I went into the march thinking ‘All Lives Matter’ was for anyone who is consistently discriminated against, whethe
r it be the Black community, the LGBTQ+ community or any other minority group out there. While at the rally portion of the protest, activists and educators of the movement gave us their stories, insights and feelings about this entire movement. These activists and educators also taught us what the All Lives Matter actually meant and how it is extremely offensive. I was so moved by the speakers and all those who attended the protest that I began educating myself more at
home about the Black community and educating those in my family about it too.”

The overwhelming support for the movement has not been without backlash. Local protestors can recount numerous scenarios in which passersby have yelled threateningly at peaceful participants.