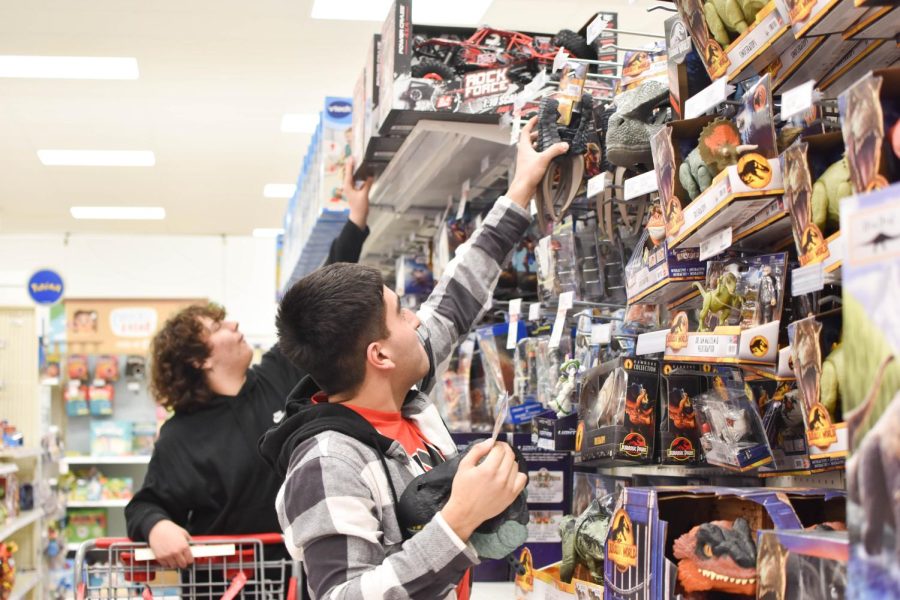 Gallery|4 Photos
Anna Evilsizor
MAKING A DIFFERENCE Participating in the annual toy roundup event at Target, juniors Jackson Collard and Anthony Ornelas pick out a toy to give a child for Christmas.“I feel heroic knowing that the gifts I personally picked out will make an impact on a child’s holiday season,” Anthony said.

Venturing off with their carts gathering Barbies, Nerf Guns, and clothing, MHS students gathered at the Munster Target on Dec. 12 for the annual shopping day for the Mustang Toy Roundup. These donations will be shipped off to the Salvation Army and local families that need help this holiday season. Mr. Leroy Marsh, health teacher and former head football coach, and  Mrs. Jamie Marsh created the program Mustang Toy Roundup almost 40 years ago, and it still is ongoing today.

“I thought my first year we would only get 30 or 40 toys, but the thing exploded,” Mr. Marsh said. “Pretty soon, the school got involved, the community got involved, and now we do about 700 to 1000 toys each Christmas.”

Mr. and Mrs. Marsh started the Roundup two years after their son Ryan Marsh was born in 1984. Ryan was born prematurely with a 3% chance to live, and he had to live off of oxygen due to his undeveloped lungs. He constantly fought lung infection and ammonia, and he passed away at the age of 13 from Respiratory Syncytial Virus. The Marsh family received tremendous support from friends, community members and even complete strangers.

“Lots of people during the time supported us mentally and financially to get through his hospital bills, which ended up being over 2 million dollars,” Mr. Marsh said. “I remember one Christmas Eve, somebody knocked on the door, and it was a Santa Claus dressed up at the door. They handed me an envelope, and then took off and ran away. The envelope was a thousand dollars of cash. There are a lot of these types of stories.”

With all the overwhelming support, they felt that they needed to do something in return. A toy drive sparked Mr. and Mrs. Marsh’s interest, and they thought it would also be valuable for Mr. Marsh’s football team to get involved.

“Coach had a team that took life for granted a bit, and he felt like a good project might help these young men and teach them life lessons,” Mrs. Marsh said. “When our son was living, people were so generous and so kind to us. We felt like we should pay it forward.”

Mr. Marsh had the football team pass out flyers and encourage others at school and in the community to donate. He also started the toy shopping tradition exclusively for his junior football players, and ended up getting between $4000 to $8000 dollars worth of toys.

“The underclassmen players started to look forward to their turn to get to go shopping,” Mrs. Marsh said, “I remember the first time we did the toy shopping, and we sent the big ‘ol linemen to shop for the little bitty barbie dolls. That was so much fun to watch.”

Throughout the years, the entire football team, Student Government, and Mustang Volunteer Project started helping out at the shopping event. Mr. and Mrs. Marsh give groups with a shopping cart assigned toy categories to shop for.

“Shopping for the toys is always a fun way to donate my time to a good cause,” Aidan Torabi, senior, said. “It’s a great program and truly helps so many kids. After seeing the amount of toys and donations that are given every year, it always amazes me.”

Mr. and Mrs. Marsh have been running this round-up for 36 years now and cannot stray away from it because so many kids and families are now dependent on the donations that they bring in during this time of the year. They are grateful for the outpour of donations they receive from the schools and the community, and it has grown to be their passion.

“It is kind of like coaching a sport, like when I coached football,” Mr. Marsh said. “As I say to coach, it can’t be your hobby, it’s got to be your passion. And this has become my wife and I’s passion. We don’t do any holiday shopping in our family until this is complete. This is something that is important to us because we see so many of the children’s faces, and I love seeing the smiles and excitement.”