“I don’t want to feel lesser than”: Food insecurity in Munster 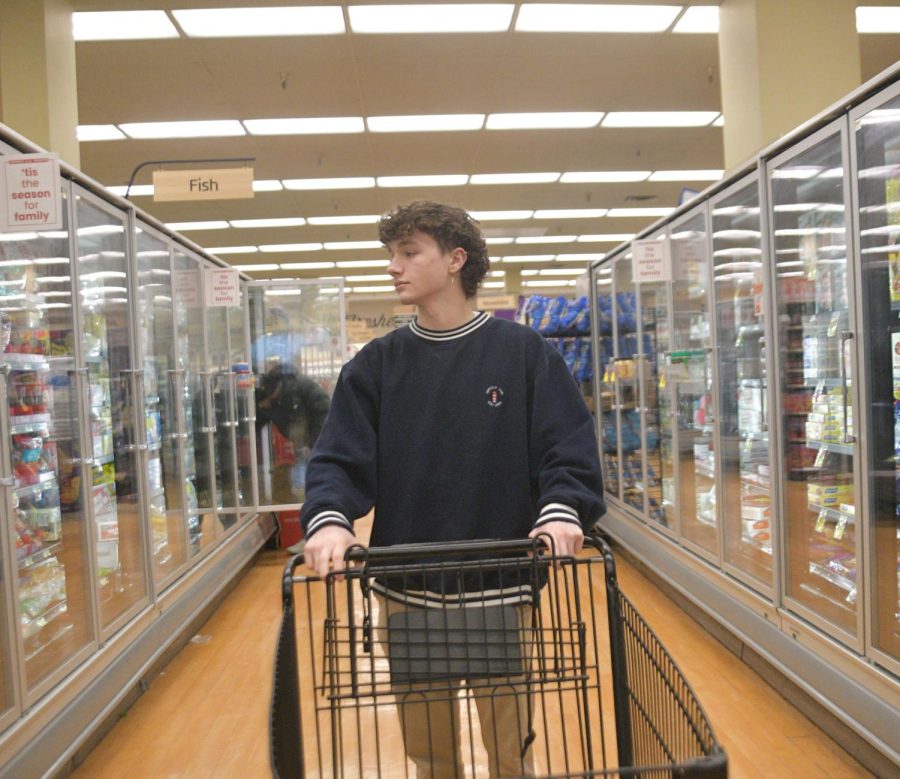 DOWN THE AISLE Posing for a photo in Jewel-Osco, Sonny Hoekstra, senior, reflects on his personal struggle with food insecurity. When he was younger, his family would only buy food in bulk: he recalls having to buy lots of raw ingredients to make everything from scratch. The photo simulates how overwhelming shopping can be.

Walking into Whole Foods a month ago for the first time, an Anonymous source felt like they had entered a whole new world. The prices on the shelves were shocking, and the amount of money that their friend’s parents spent on groceries was unfathomable. They saw delicious food samples being given out for free, and glancing down, they were surprised by a price tag reading $16 for a container of salsa. They could have cried.

34 million people in America struggle with food insecurity and ways to provide basic needs for their families. In Indiana alone, that number is around 730,000 people, meaning 1 in 9 people face this formidable lack of access to home-cooked meals, which can get expensive.

“I can’t remember the last time I’ve had a home-cooked meal, unless it was from my friend’s house,” an Anonymous source said. “We always get those microwave dinners, and I get embarrassed when I talk about it. I know people’s parents cook for them, but it’s just so expensive.”

Their experience doesn’t stand alone. 18% of Munster students receive free school lunches and 5% of students receive reduced lunches, says Hans Oksam, Director of Food Services. Sonny Hoekstra moved to Munster five years ago, and while his family is better off now than they were before moving to Munster, he says Munster was a totally different experience.

“When I moved to Munster, it was an extreme culture shock. I lived in a very poor neighborhood, with a lot of food insecurity,” Sonny Hoekstra, senior, said. “My family was unsure about where we might get our next meal for a long time before coming here.”

Sonny also says another severe adjustment for him was the attitude of his friends when he mentioned where he lived. They perceived his neighborhood as the “ghetto of Munster,” but to him, Munster was the farthest place from the “ghetto” one could be. Compared to the neighborhoods he had lived in years before, Munster was extremely safe. Sonny finds that people who live in Munster do not necessarily know what it is like to live in lower-income neighborhoods.

“I couldn’t comprehend what they meant when people told me I lived in the ‘ghetto of Munster’,” Sonny said. ‘Because I was like, it’s Munster. You guys have zero idea what a ghetto actually is.”

He conveys that there is a strong stigma and misconception that poor people are lazy because they do not have as much money; in reality, they are some of the hardest-working people he knows. The misconceptions that Munster residents possess lead people like the Anonymous source to feel uncomfortable talking about financial issues, even with trusted teachers. Anonymous felt this way while joining clubs, a lot of which here at Munster cost money in order to join and participate. Most students are able to front the money, and oftentimes think nothing of it. For our anonymous source, it was more than just a simple fee, and they struggled to ask the sponsor for more time to pay.

“I just feel like an idiot,” Anonymous said. “I’ve learned to tell the sponsor, but it always feels like I’m asking too much.”

As hard as it is to talk to adults about money and financial issues, Anonymous finds it is even harder with friends. They feel alienated and fear friends wouldn’t understand the hardships they go through because there is a stigma attached to being poor in Munster.

“It’s embarrassing, so I keep my mouth shut when people complain about issues that are monetary,” Anonymous said. “They don’t seem to realize their privileges. I’ve never been able to experience what they’re experiencing, and it feels awful.”

For Anonymous, it is easy to look at friends or peers and long for what they have. They explain that while they try not to let their envy affect their interactions with others, it is difficult to restrain from being jealous or having animosity towards friends who are better off.