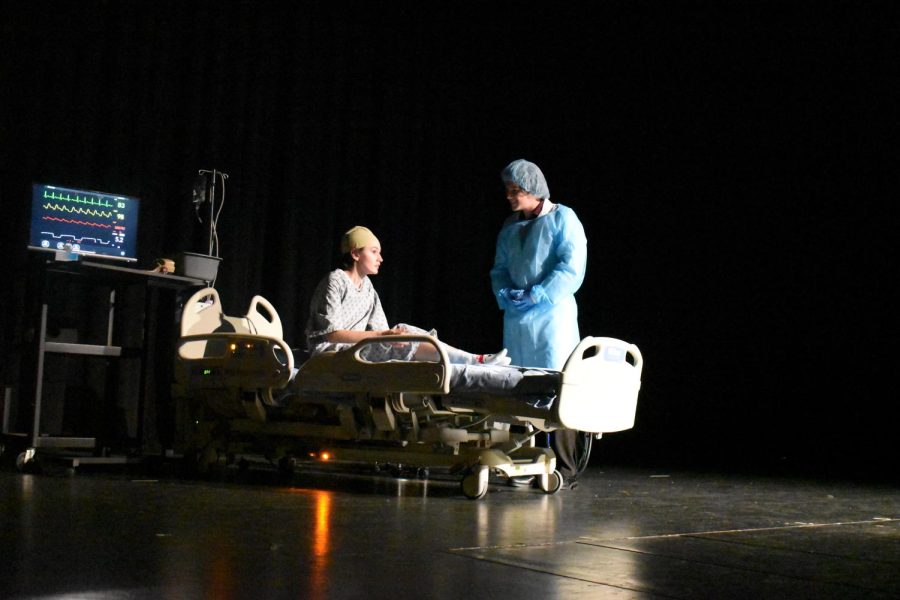 A SHOWSTOPPER Running through the show, Clover Sarkaday, junior, and James Ferguson, senior, perform for the last time before an audience watches “Wit.” Contest shows always have the least amount of time to rehearse, so making a dynamic show come to life is always difficult.

Standing in the limelight: Theatre prepares to perform “Wit” at Regionals Dec. 3

Putting another wrinkle on her face with makeup, Clover Sarkady, junior, prepared for opening night Nov. 10. The Munster Theatre Company performed “Wit” by Margaret Edson in the auditorium Nov. 10-12, the show they are preparing for Regionals. They will be competing at Hobart High School alongside six other schools Dec. 3.

“Preparing for Regionals has been harrowing but fun,” Clover said. “Everyone is stressed, but it’s fun to figure stuff out together, especially my bald cap.”

At each rehearsal, members run through the show and then receive feedback from Mr. Raymond Palasz, sponsor. During this time, technicians focus most on creating lighting and sound cues. This tends to be their biggest challenge at Regionals since they will be working with entirely different lighting and soundboards.

One struggle that the MTC has come across while working on the show is coordinating props effectively, such as fake medical equipment. To overcome this, they work on communication by practicing more outside of rehearsal via FaceTime.

“Learning how to use medical equipment is hard, like the fake IV taped to my chest,” Evvy Kikkert, sophomore, said. “We just need to keep working with it.”

An award ceremony is held at the end to recognize the top three performances, STO All Star Awards and others such as best lead performer.

“Theatre is a way to experience emotion while still being safe from them,” Evvy said. “Both the actor and the audience are able to experience intense emotions, walk away and realize it’s just a play.”