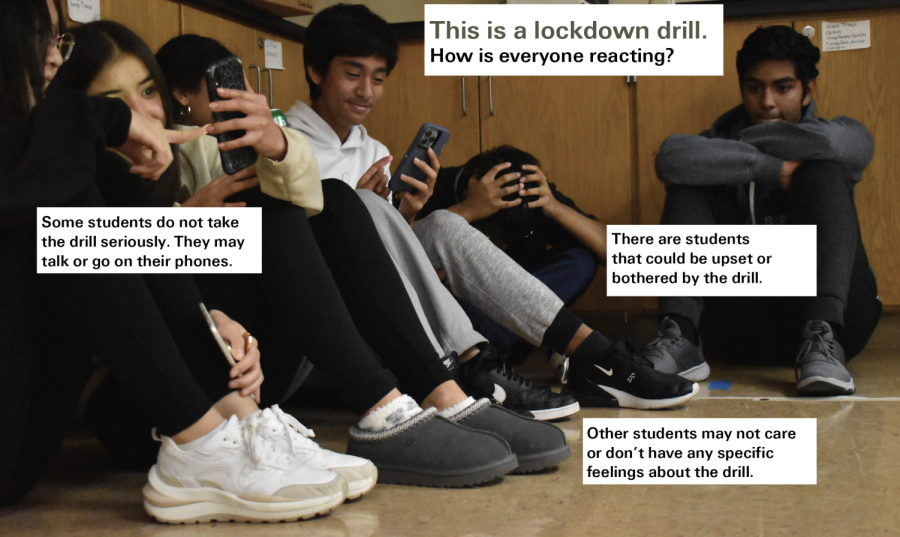 Safety is one of the most important factors that contribute to a positive learning environment. Without a safe environment to learn in, students cannot be successful.

With the concerns of the covid pandemic beginning to vanish in the rearview mirror and students again returning to school full-time, student safety has become a prevalent issue again. According to the K-12 School Shooting Database, there were 93 school shootings with casualties at public and private schools in 2019-20, the most at that point since the 2000-01 school year.

“Threats like school shooters definitely scare me even more so because I’m Islamic and wear a hijab,” Jasrah Ali, senior, said. “Even if I didn’t wear one, people still come into schools and shoot kids regardless of who they are.”

Mr. Morgan Nolan, principal, said that a safe learning environment, while easy to define, is hard to achieve.

“It’s a sliding scale,” Mr. Nolan said. “Do you ever reach that city on a hill point where in this case, all 1,530 students feel safe all the time, at every single point in time? No, because there’s always risk in life.”

But according to Mr. Nolan,  it is the school’s job to make sure students are aware of the risks present, and are equipped with the tools to navigate them. One resource students have is the Student Advisory Council, whose main goal is not only to keep our students safe but make sure they feel safe and encourage behaviors that promote safety. SAC is supervised by Mr. Brian Clark, Assistant Principal of Student Services.

“I think one of the most important aspects of school safety is making sure that our students have the resources like guidance and administration to go to when they don’t feel safe,” Mr. Clark said.

Having a place to go when they need help is a very important aspect for overall safety for a lot of students. In a time of notable worry and anticipation over man-made threats, students feel it is important to be able to express their concerns and have them taken seriously.

“For me, mental health is really important in helping keep students safe,” Delaney Craig, junior, said. “Even if threats never materialize, I think the thought of a threat really scares us, and some reassurance would have been really helpful.”

Social media has also played a large role in mental safety in schools and school communities. With an increase in social media usage, students have taken to the internet to bully their peers and it has an effect on students both in school and out. Education Week reports that in the 2019-2020 school year, 16% of public school leaders reported cyberbullying, which was double the 8% of school leaders that reported it in 2009-2010. However, when surveying students, they found no measurable increase in the prevalence of cyberbullying within the last decade.

One of the administration’s main goals for our school is to maintain a safety plan designed for a number of concerns from man-made threats like intruders and physical violence to natural threats like tornadoes and earthquakes. This plan includes both the required elements and additional measures, and is signed off by the superintendent and collected by the state of Indiana.

Whether or not efforts are successful, however, seems to depend on who you ask. While some members of the administration are confident their efforts are effective, some students still think they could do more.

“I think we do have a pretty good system in place for drills,” Delaney Craig, junior, said. “But I think that when threats do come up, administrators don’t always inform the student body, and informing us is really important to helping us feel safe.”

Other students are concerned about the issue of the early arrival of buses before school doors open in the morning. Although the amount of time students wait is not obscene, with temperatures dropping, students argue there is a safety concern there.

“Sometimes buses drop students off even earlier, and then you have 50 some kids waiting outside,” Pemi Ogunjimi, sophomore, said. “I mean, those kids could theoretically just walk away, no one’s stopping them.”

Plus, Pemi mentions, standing in sub-freezing temperatures for five minutes in the morning isn’t exactly a pleasant start to the day. However, some students like Jasrah think our school does a fine job of addressing concerns. She said, in her experience, complaints brought to administrators get handled effectively and timely, doing everything they can to ensure students are both staying safe and feeling safe.

Students say it is clear that there is a divide between the topics our school thinks are important to prioritize, and that of the students. Mr. Nolan said the measures students choose to ignore are the most common ones. He says that generally, students do an excellent job preparing for events like fires and lockdowns but not the smaller, more common issues are not always taken seriously.

While the administration and resources like Student Advisory Counsel are important to helping students feel safe in school by providing support and information, students also play an important role in their own safety. Mr. Nolan says one of the most important things students can do for themselves is to report concerns when they come up.

“You guys are always going to know more than we are. We’re not on Snapchat and TikTok.” Mr. Nolan said. “We’re not going to hear the same things that students hear. So reporting those things to us so we can actually look into those things is the number one thing students can do. Pay attention, and be vigilant.”