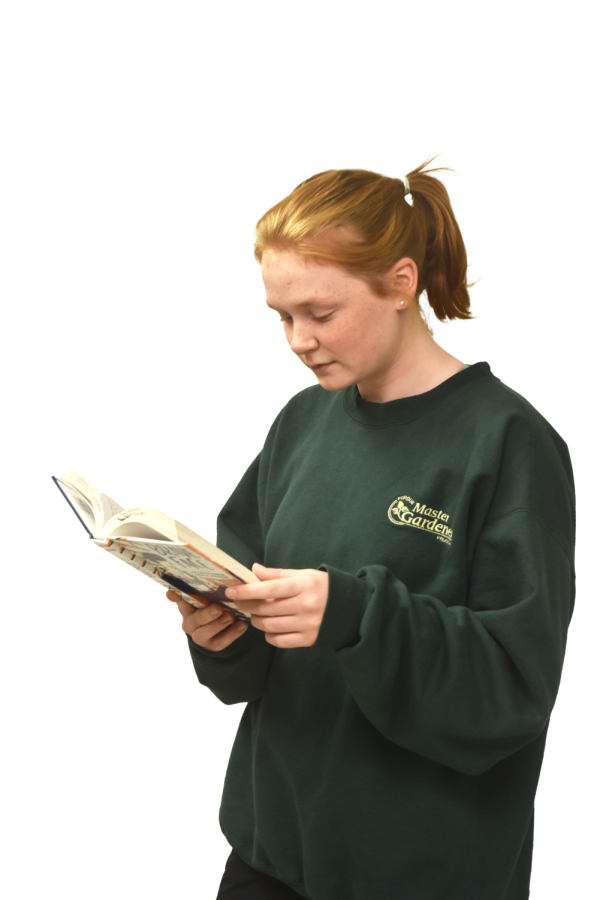 READING BETWEEN THE LINES Reading through a copy of “Brave Face”, Lucy MacDonald, who identifies as LGBTQ+, reads about growing up, coming out, and dealing with depression. (photo by zoe clark)

Sitting in class, Sophie Ferrer, freshman, watches a video about literature and the teacher skips over a section that details queer relationships within the stories. For LGBTQ+ students like Sophie, this scene is not uncommon. Looking back, she can recall many times in which LGBTQ+ history was skimmed over or ignored. This creates a space where she cannot easily accept herself or see that their experiences are normal.

“Being a part of the LGBTQ+ community has made my life a little bit harder in MHS,” Sophie Ferrer, freshman, said. “I struggle with feeling pride sometimes because I really wish that I could be like other girls, fawning over boys and stuff like that. I don’t have that connection, and it makes me feel very left out.”

National LGBTQ+ History Month takes place throughout all of October, and National Coming Out Day was Oct. 11. For some students, the month is a time of reflection on queer history in the United States. MHS does not have any books in the curriculum with queer chracters nor does it teach LGBTQ+ history. Mr. Thomas Barnes, English department chair, shared that in May, newer textbooks are coming in with more diverse authorship. Novel selections are trying to be updated; however, replacing books costs thousands of dollars, and the department is struggling to find modern books that are school appropriate.

“I think it’s important that everyone gets various viewpoints,” Mr. Barnes said. “It’s important to see the world through the lens of various demographics. If everything is only through the eyes of a white male or whatever it may be, then you’re missing out on a lot of different colors that exist in the palette of literature and experience.”

In recent years, more states have required LGBTQ+ history to be taught in schools—California, Colorado, New Jersey, Oregon, Illinois and Nevada. In Indiana, there is no law, and students do not have many places to turn to within the school system. According to the Indiana Youth Institute, three out of four LGBTQ+ students in Indiana experienced at least one form of anti-LGBTQ discrimination at school in the past 2021 school year. A club that tries to minimize harm from such actions is Gay-Straight Alliance.

“We’re in a stage as a club where a lot of students are looking for a place to build themselves up first,” Mr. Ben Boruff, GSA sponsor, said. “There is definitely value in diving into advocacy and trying to change your environment, but for some, they need a space to heal first before they can take on too much of that.”

According to Mr. Boruff, teachers are not trained to deal with LGBTQ+ students specifically—rather, aspects of LGBTQ+ statistics are incorporated with other training. When being trained on suicide prevention, for example, teachers look at the rates of students who attempt suicide, a large proportion being LGBTQ+ students. There is no specific training for LGBTQ+ students at a state level or at MHS specifically, though some counselors can make an individual effort. For some students, like Lucy MacDonald, senior, a lack of these support systems led to more underlying fears.

“I think that was scariest, not being able to go talk to my school counselor because I was scared of what they were going to say,” Lucy said.

Like Lucy, other students believe that taking the steps to understanding should be a priority for the school system itself, not just GSA. As a response, students have had to seek out those support systems. Being an openly queer teacher, Ms. Abigail Brosseau, adult roles and responsiblities teacher, has had several students reach out to her as a role model. Students struggling with their identity have gone to Ms. Brosseau with questions of identity or when they face mean comments during school.

“It is great that I have created a safe space for students to come to,” Ms. Brosseau said. “But it breaks my heart that it’s 2022 and people still struggle. It has been brought to tears multiple times because I just love my students so much, and in 2022 people still have to go through crazy things like that.”