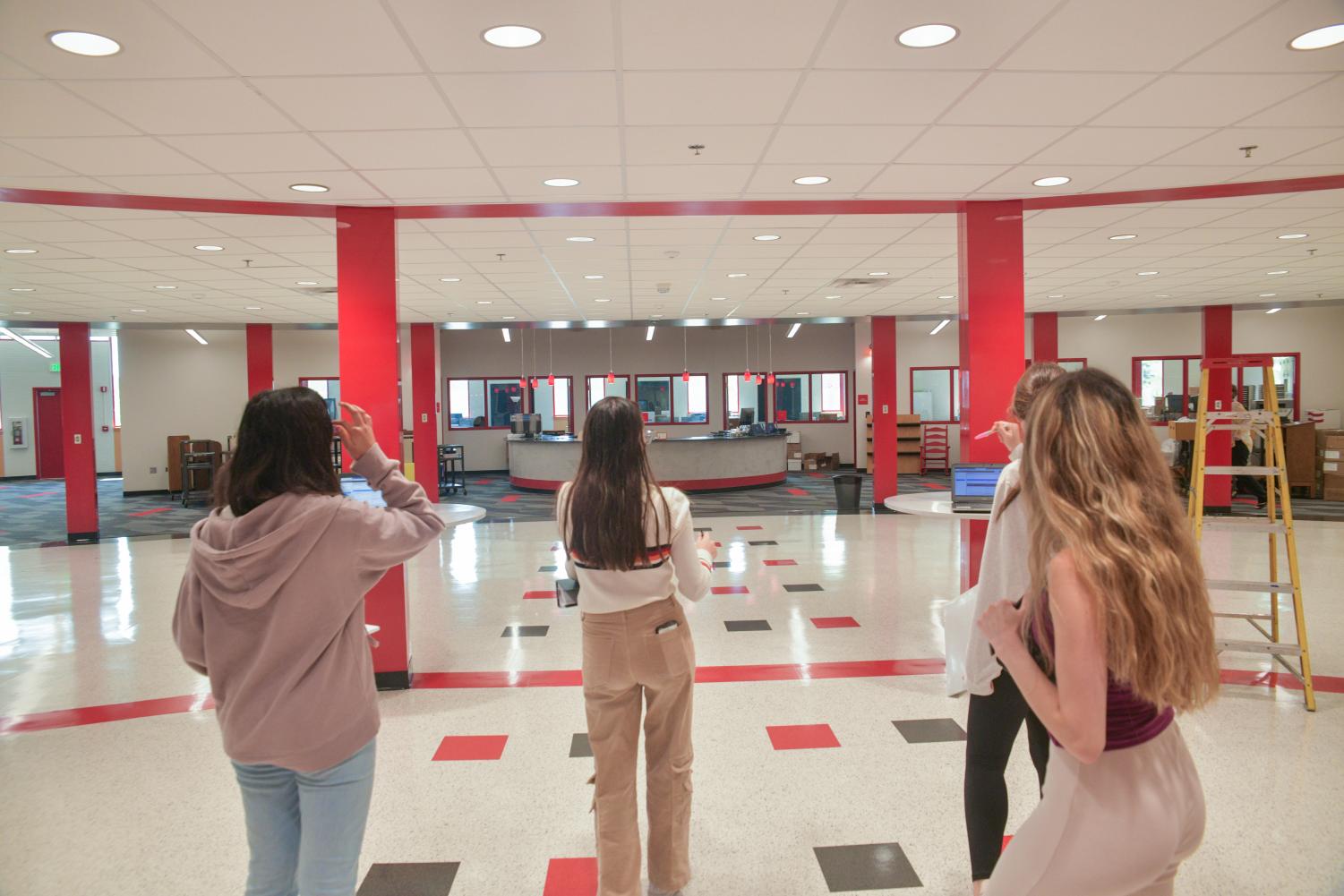 KNOW THE DRILL Crier staff members walk into the brand new Media Center. Construction of the media center has students eagerly waiting for what is in store. The new media center contains brand new floors, walls, bathrooms, counter tops and more. The Media Center will be furnished around late September, but students should have access in the next coming weeks. (Ethan Pischner)

KNOW THE DRILL Crier staff members walk into the brand new Media Center. Construction of the media center has students eagerly waiting for what is in store. The new media center contains brand new floors, walls, bathrooms, counter tops and more. The Media Center will be furnished around late September, but students should have access in the next coming weeks.

Opening the doors: Students and staff reflect on new changes to the 2022-2023 school year

Walking into the new Media Center, students are flooded with freshly painted walls, towering glass doors, new counter tops and shiny floors. This is the scene that replaces the 1996 remodel of the Media Center, and it is a development that symbolizes the administering of many new changes to the school year.

Since the beginning of the year, students have had to adjust these changes, along with a variety of others. As a result, there have been questions of lingering uncertainty. What will the remainder of the year look like with the adjustments—a new principal, a differing schedule, no contact time and—most apparent—the construction littering every edge of the school.

Construction on the Media Center was a $3.5 million project beginning at the end of the previous school year, with financing directly allocated through the school’s Operation Funds. Students have been allowed access to the Media Center for computer problems, moving these technological functions out of the fab lab. But proper entry, according to Principal Morgan Nolan, is set for the next coming weeks. However, its full completion is estimated to be around Thanksgiving Break, with furniture coming in around early October. The goal of the renovations is to allow more students to utilize the resources available to them.

“I like the construction. I think it’s a really fun way to keep students interested in the school,” Anagha Kodukula, senior, said. “I think a lot of the students are fascinated by it, including myself. And I know everyone’s super excited and eager to be able to work in the LGI and media centers.”

Until the Media Center is complete, Ms. Kelly Hladek, media specialist, is encouraging students to take advantage of the eLibrary. Books will eventually be located in shelves along the red pillars of the Media Center. But the entirety of the space, according to Principal Morgan Nolan and Mr. Sean Begley, director of operations, is also very flexible. The rooms may be accessible to students for Speech and Debate practice, or for AP testing in the future. There are several distinct areas for group work that teachers will be able to reserve, with labels such as “professional development area” and “collaboration room” on the walls. The Mustang Cafe, however, is still up in the air regarding when it will be up and running. The idea is something that Mr. Nolan and Mr. Begley will continue to discuss.

“The cafe is still a big question mark,” Mr. Nolan said. “I think that’s the question, who’s in charge of it? The tough thing is trying to figure out what we want to do with it. There was this idea of having coffee and stuff like that served down there, and I have no problem with it. But who’s going to serve the coffee? So we’re having some of those discussions. We’re not sure. But it provides the flexibility to do some things down there that we might not have had before.”

The further integration of Professional Learning Communities was a long-standing goal for Mr. Nolan, and its impact is felt by both students and staff alike. PLCs designate time to build team communities with clear goals. Teachers meet each morning in several teams, replacing previous contact time on Tuesday mornings and MRTs in the school day. This, however, according to Mr. Nolan, was a strategic decision, as now students can meet with teachers any day they do not have a meeting.

“It is just working through those things should give some more flexibility for teachers and students to try to work together to keep the academic stuff moving forward,” Mr. Nolan said. “If kids or students need access to the math department, there should be more access, because the access is available four times a week now as opposed to one time a week. It’s really just working with your teammates and your colleagues.”

Making the decision on how to change the schedule was not an easy task, but it was one that Mr. Nolan believes will be beneficial in the long run.

“There’s always a cost-benefit analysis for everything that you do,” Mr. Nolan said. “The question was, ‘what are the most important things for us to be successful as a school district?’ For me, that’s teachers working together in teams. That’s one of the most important things–an orderly environment is number one. Number two is a place where we have collegiality and teamwork. We went through a lot of additions on the schedule, we looked at blocking, we looked at some different things. We decided to make the smallest change possible to get what we wanted.”

The absence of MRT is something that students are still getting used to, and that certain clubs have been working around. Students and clubs, regardless of their opinion, have had to adjust. For example, this absence of MRT also posed a problem for Link Crew, a club that focuses on helping the incoming freshman through their first year of high school. Last year, Link Crew spent time in freshmen MRTs to provide fun and helpful information. A common question since the schedule change has been what Link Crew will be doing to help now.

“Since MRT has been eliminated, the administration and link crew sponsors have been in conversations to have events during the school day instead,” Ms. Kristen Szafasz, social studies teacher, said.

With the change of principal this year, morning announcements have been introduced. Every morning, Mr. Nolan’s voice crackles through the intercom, reciting the pledge, providing information about upcoming events, and wishing students a great day. It also gives students a chance to hear from the principal more frequently. Mr. Nolan plans to continue morning announcements, providing students with the opportunity to take a deep breath and focus on the day ahead.

“At first, I was like, why do we do this, but I found that was just a really good way for students to build some auditory connection with me, you know, as a person, right?” Mr. Nolan said. “It’s hard for me to be visible in the school, physically at all times. I love getting in classrooms. I love being out in the hallways, I love being at lunch.”

At the beginning of the school year, students attended the disciplinary assembly held in the auditorium. In addition to curiosity about the new changes, some students wonder why it seems there are new, stricter rules this year. Turns out it is just a common misconception.

“I think the perception is different. Because last year, we didn’t get to do the full handbook presentation. And so I think we were just more intentional this year about communicating expectations,” Mrs. Helen Fuller, dean of students, said.

Last year, still having scattered covid restrictions, administration was not able to get students in one area to discuss regulations. Some students have felt that there was more leniency in terms of dress code and have found the execution to be overwhelming compared to years past, because people were still getting acclimated to school again. Now with most things back to normal, administration immediately decided to clearly inform students for understanding, and has gone to greater lengths to emphasize the handbook. Some students find certain rules and changes reasonable, especially in regards to student safety, but others find certain regulations to be tedious.

“The dress code is all very vague and when I got called down, nobody was able to tell me any more than my shirt was “a little low,” Evvy Kikkert, sophomore, said. “My undergarments were covered. If my violation of the dress code was because what I was wearing was “provocative,” then I would like someone to say that to my face and explain that to me. The dress code is vague and I received little to no explanation on what rule I was actually breaking.” 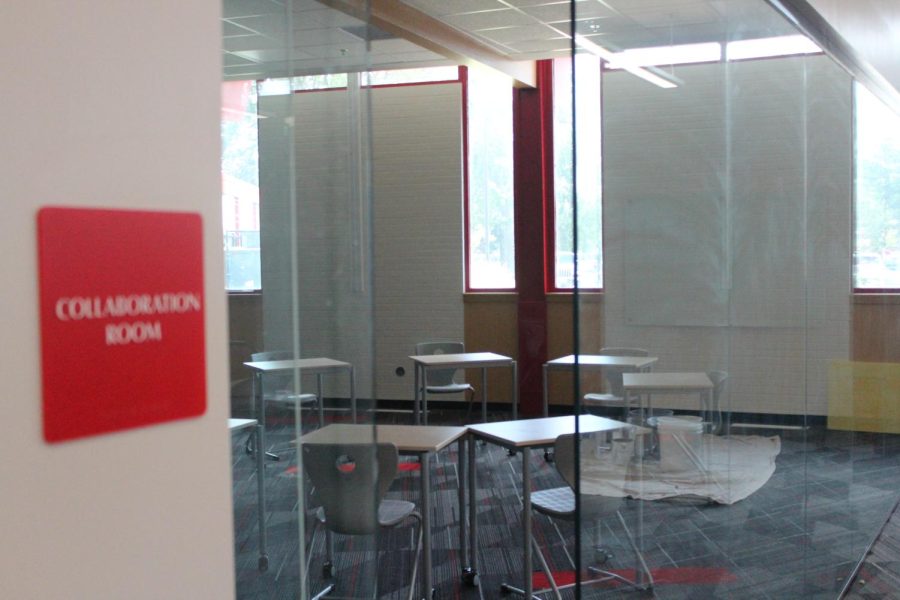 Gallery|8 Photos
Ethan Pischner
Teachers will be able to reserve this Collaboration Room for their classes, and the room will hold more traditional furniture.
Leave a Comment