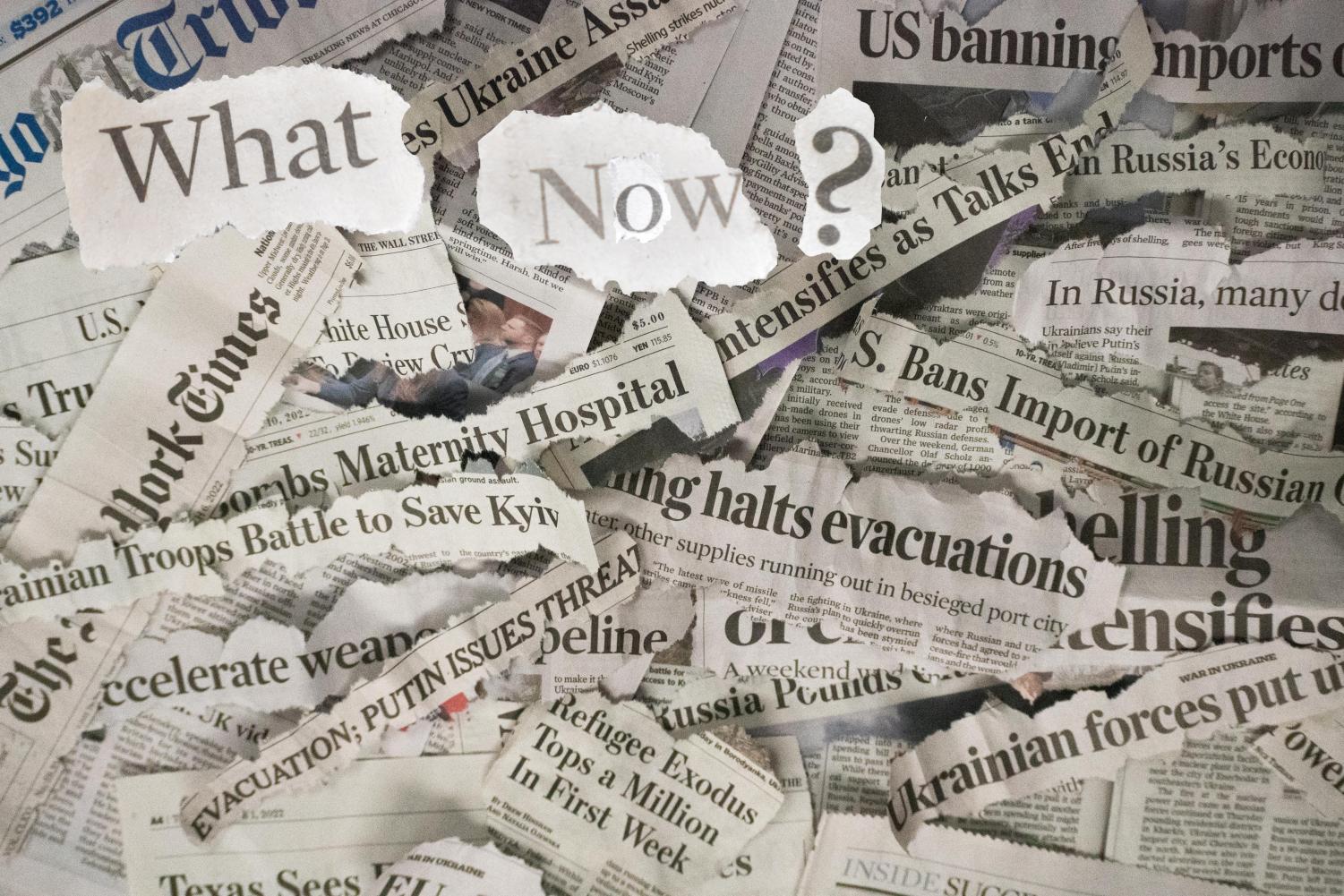 OVERLOAD Seen above are newspaper headlines about the recent Russia-Ukraine conflict. Media coverage has increased rapidly, informing students while probing a variety of questions. (Kristen Baurain)

OVERLOAD Seen above are newspaper headlines about the recent Russia-Ukraine conflict. Media coverage has increased rapidly, informing students while probing a variety of questions.

When Alex Prots, sophomore, first heard about the invasion of Ukraine, it was to the sound of his mother’s voice waking him up. With family located in southwestern Ukraine, Alex has felt an additional wave of worry for his other home.

“I started watching the news and then I stopped. It started giving me a headache and more stress in school,” Alex said. “I think people are thinking seriously. I have teachers coming out to me, and telling and asking me if I’m okay, if my family is okay in Ukraine.”

I feel in Munster, we live in such a bubble. And sometimes we forget that there’s a world out there that isn’t as privileged as us.”

The Russia-Ukraine conflict has been present for years, but recent events and media coverage has sparked a topic of conversation among students. Though there has been an emphasis on the recent invasion, many have discussed a lack of genuine understanding with the history behind the situation. As a result, the issue of educating students has surfaced, and solutions include the form of watching the daily news, integration into current curriculum or even implementing a current events course.

“My fear is that a lot of (Information) is misinformed,” Mrs. Kathleen LaPorte, social studies teacher, said. “I try to get kids to look at multiple different sources and watch the news at night. I would love for someone to teach a current events class; it would be an uncomfortable class. We know that that is something that our younger generations really struggle with. They don’t like to be uncomfortable. But we have to try to get to the bottom of some of these things. We can have a view of what’s happening in Ukraine and Russia, but do we actually understand these deep, deep relationships that are occurring in this area?”

As simple as it may seem, a current events course would take a lot of effort to incorporate. The social studies department would not only have to figure out if this is a class students are willing to take, but a set teacher, grade range and standard for how the class would avoid issues with parents would need to be set in place. According to Mr. Steve Lopez, social studies teacher, the class would greatly benefit students, as well as other methods of incorporation, such as dedicating a few minutes to current events as he did teaching in Whiting.

According to a Crier survey of 336 students, 57.4% of students receive their current events from social media, and 11.9% of students talk about current events often. Many teachers and students have discussed some possible repercussions from getting news through various social media platforms. Though some argue that social media is not a proper means of getting information, other students, such as Abhiram Kandregula, junior, believe that social media acts as a spark of curiosity; once it’s triggered, it can lead students to doing further research on their own.

“I definitely feel like (social media is a good way for students to get knowledge on topics) since most of the time a lot of teenagers are on phones through different social media platforms. It’s a good way to spread information in this day and age,” Abhiram said. “Not that many people actually sit down to read a newspaper or listen to the news. Going on social media is a really easy way to actually spread information, and people get interested and start learning.”

I think that there’s enough curiosity when something happens, (but students) don’t have a base to have which to go off.”

For students like Abhiram, social media serves as a means for younger generations to start building interest in current events. Though there are benefits, a study from the Journal of Personality and Social Psychology shows that people who are exposed to violent media are more likely to be desensitized to it over a longer period of habitual use. According to Emily Sun, senior, this is clear as students’ main focus of the Russia-Ukraine conflict is the discussion of a possible World War III, and less of the actual cities being bombed. With a current events class, students would be exposed to a more well-rounded review of international conflict.

The details are being lost to the students and we don’t know how extreme the circumstances are. ”

“In general and war times, it often gets glanced over that actual people are being killed and displaced,” Emily Sun, senior, said. “We’re so desensitized to everything, but in Ukraine specifically, I feel not a lot of people know how many people are trying to flee the borders and I don’t think that aspect is touched on too much.”