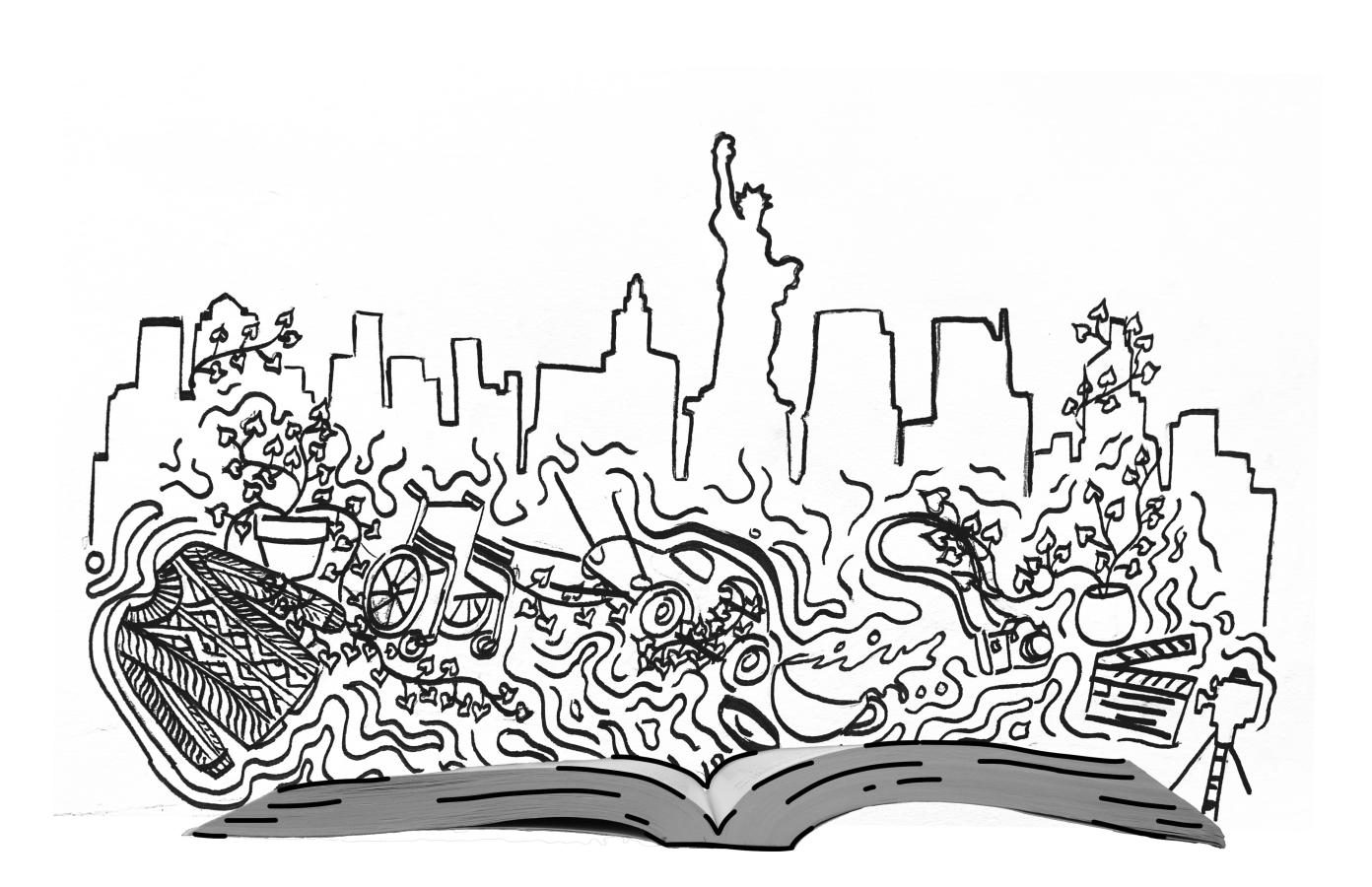 “A Little Life” by Hanya Yanagihara

A page out of their book: Crier reviews some MHS English teachers’ favorite books

“A Little Life” by Hanya Yanagihara is a favorite of Mrs. Kelly Barnes with a toppling 816 pages. The narration follows a group of four men over the course of their lives; the chapters dive into their relationships with one another, as well as their childhoods, aspirations, mental illnesses and struggles with everyday life.

The book presents many conflicts throughout its beginning, highlighting crucial moments for each of the boys. Though the main string of conflict begins to pick up during part four, aggravating for some readers, for others, the build-up is rather enjoyable. The narration tends to shift from character to character; to some readers, this can be very appealing, as it offers a variety of perspectives. To other readers, however, it can muddy their interest and attention as the author does not explicitly state which of the four main characters are being discussed. The author puts the burden of decoding on readers, which allows for the reader to try and learn more about the group of friends and figure out which character is which.

The timeline of the story tends to switch based on the chapter; the author often goes from the future to the past, and vice versa. This allows the reader to gain insight about important moments during a character’s life, but Yanagihara tended to end a particular timeline without giving the reader a sense of finality throughout the work. Additionally, while there were many details that allowed the reader to truly understand the characters, there were often many that the author failed to omit, even when they did not help move the story forward. On top of that, the author seems to indulge in excessive use of run-on sentences that can overwhelm the reader.

Despite these flaws, mental struggles that the reader was able to see the four main characters go through brought everything together. The reader could deeply empathize with each character, making their pain significantly more impactful than most other books. “A Little Life” is also unique in that it depicts characters who were still struggling to learn about themselves past the age of 30; it portrayed how adults are allowed to still be affected by childhood trauma. Mental health issues are not simply fixed with a strong support system, and Yanaghiara did an excellent job with this idea. Furthermore, Yanagihara did an exemplary job at making the reader feel everything that the characters did. The goal was to develop characters that were no different than humans a person could meet, and the author executed that exactly.

A favorite of Mr. Ben Boruff’s is the Pulitzer Prize winning book “The Road” by Cormac McCarthy. An enjoyable, quick read, this story follows the struggles a father and son face as they trek through a barren land decimated by fire, in an almost post-apocalyptic world.

This take on a dystopian world was refreshing as it poses a different view that many popular dystopian novels lack—there is no hero or corrupt government that needs to be overthrown. One of the most interesting aspects of this book is that the novel does not explicitly explain the reasoning behind the world becoming a barren wasteland of ash and gray. Leaving this interpretation up to the reader ensured that certain unnecessary aspects were not overexplained, and the ambiguity only adds to reader intrigue. 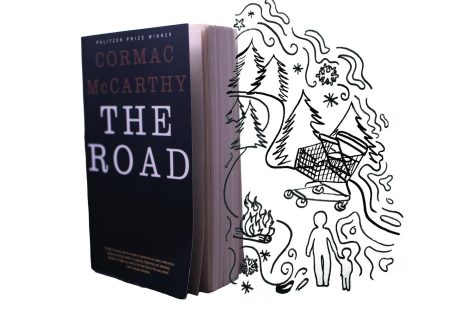 The story is told through a series of chronological events with sporadic flashbacks that help develop the characters and the situation they are in. The development of the father and son’s relationship was done well, and the book allowed the reader to feel both the highs and lows of the relationship, especially the tension created through imagery. Though the dialogue was often short, each line held a dagger to the reader’s heart.

However, what brought the book down to 3 stars was its lack of impact. Specifically, the ending was very abrupt and not well fleshed out, making the turning point of the story anticlimactic. Throughout the story, the book retains a certain tone that takes a complete turn without actual elaboration. A different ending would have provided another layer of mystery rather than the one that was presented, ultimately leading to the reader feeling confused and underwhelmed rather than satisfied.

Mr. Barnes: “For Whom the Bell Tolls” by Ernest Hemingway

Acclaimed as one of his best works, “For Whom the Bell Tolls” by Ernest Hemingway chronicles the tale of Robert Jordan, an American volunteer attached to a Republican guerrilla unit in Spain’s mountains, who is tasked with blowing up a bridge during the Spanish Civil War. Hemingway’s tale outlines the harsh experiences of wartime with questions of morality, and it looks at the relationship between Robert and Maria, a Spanish woman he meets on his journey.

One of the most brilliant aspects of this work is the way it is written. The book contains heavy descriptions allowing the reader to experience everything along with the characters. The text is also very dialogue-heavy, appealing to many readers. Hemingway uses a stream of consciousness throughout his piece; the reader is able to feel Robert’s thoughts as he questions himself back and forth. Many times can the reader find themselves in awe of the impact of a certain line; the book presents questions about the value of humanity and does so in an accessible way. Even for those who have never displayed any interest in reading about war or its consequences, “For Whom the Bell Tolls” almost forces the reader into its tale. 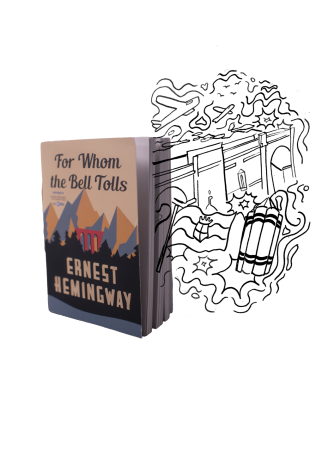 While this book is written beautifully, it certainly is not for everyone. It has a slow pace, which can appeal to some but not others, and it is less of a tear-jerking page turner rather than a drawn out tale. Additionally, there was hardly any build-up to the relationship between Maria and Robert, but Hemingway includes Maria to depict how love acts as a salvation for Robert.

But overall, in terms of characterization, Hemingway both wins and fails. The point of view throughout the book is not continuous; it alters between the main protagonist and other characters, allowing the reader to experience what different characters are going through. Additionally, the scenes that Hemingway uses his characters to describe exemplify the horrors of the time period. Despite these successes, the reader never gets emotionally attached to a particular character. There are times of horror and sadness, yes, and moments when the reader gets to understand a particular character; nonetheless, none of the writing used was enough to allow the reader to fully immerse themselves into their well-being.

Nonetheless, the book is a solid 4  stars, but unlike other works, it is not something that will be enjoyed by everyone. Regardless, there is no questioning that the book was wonderfully written.