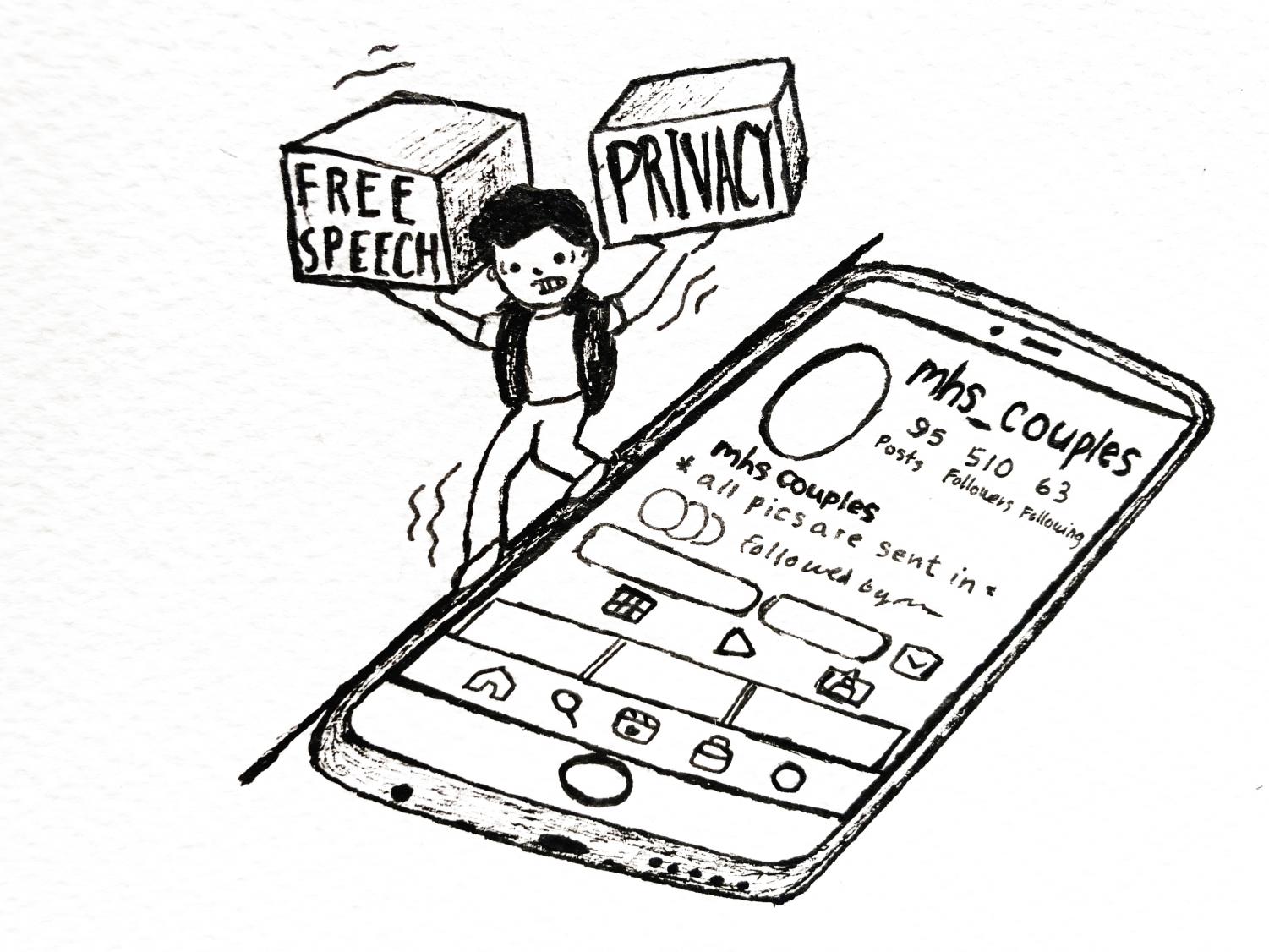 At a critical point in their lives, teenagers face a unique challenge from the moment they step foot on MHS grounds. But the issue starts even before this — Growing up with a push towards the internet around early middle school, students have both the blessing of being able to freely publish their own thoughts as well as the frightening responsibility.

It is easy for many students to hide from certain limits under the disguise of the internet. Though students know that types of speech can result in consequences, there is another line between absolute freedom and strict regulations. For example, students care more about free speech when it impacts them directly. With the trends of Instagram accounts like @mhscouples and @mhsslumped, more students may be talking about free speech rights now more than ever. As an issue becomes more local and begins to impact students directly, the more they are exposed to the First Amendment.

Take the Mahanoy Area School District v. B.L. as a reference: when a young cheerleader openly used profanity on social media in frustration after not making the JV cheer team, and the school suspended her from the team for a whole year—simply because of her social media post. The court sided with the cheerleader, but the school’s initial drastic action portrays the idea that speech on the internet is permanent. However, there is still a difference between the cheerleader instance versus that of everyday life in Munster—for example, when students post non-consensual, but (technically) legal photos during school hours.

Students need to learn to walk the fine line between free speech and harming their peers.

The recent joke MHS accounts have sparked chatter throughout the school. To some students, having pictures posted of them is nothing more than a joke. For others, it has brought about the question of whether or not students have the right to post certain photos. Though this trend was only recently sparked at MHS, the idea of taking photos of others and reposting them is common throughout schools. The content of the photos can range from being lighthearted and joking to flat-out derogatory and ill-mannered.

While many students consider this a violation of privacy and leaves some students feeling vulnerable, the burden of restricting such speech does not fall on the administrator’s shoulders. Additionally, photographers have a right to take photos of others in a public space. There are moments when people think nothing of having their photo taken in public when it is by a trusted source, but the level of discomfort increases when at the hands of random students, even though they are technically not prohibited. So where is the line drawn?

The limitations to solving this issue do not account for the people’s intentions, whether they are harmful or not. Though this generation has been pushed out into the internet at a young age, we cannot solely attribute the lack of agency to naivety. Freedom to say whatever and post whenever may have limits, but there are moments in which students have to go beyond those preset conditions.

While there is a lot of disagreement on when free speech impedes the rights of others, there is a missing pre-established societal rule to destroy the barrier allowing others to hide from consequences under social media. Through social media, students are rarely aware when their photo is being taken, and these photos can now be widely distributed. Treating people’s personal boundaries in the same manner as you would in-person is crucial, and hiding behind the barrier of an Instagram account does not exempt responsibility.

There is no clear-cut way to establish boundaries, but it is a balancing act between individual liberties and a general respect for others’ rights to privacy. As a rule, students have to toe the line when considering an issue of locality—posting about a school or someone attending that school, for example, elicits more consequences than posting about an issue of greater distance, both physically and metaphorically.

By creating limitations outside of what is technically legal, students are promoting a greater sense of awareness  as they preserve the security and comfort of others.