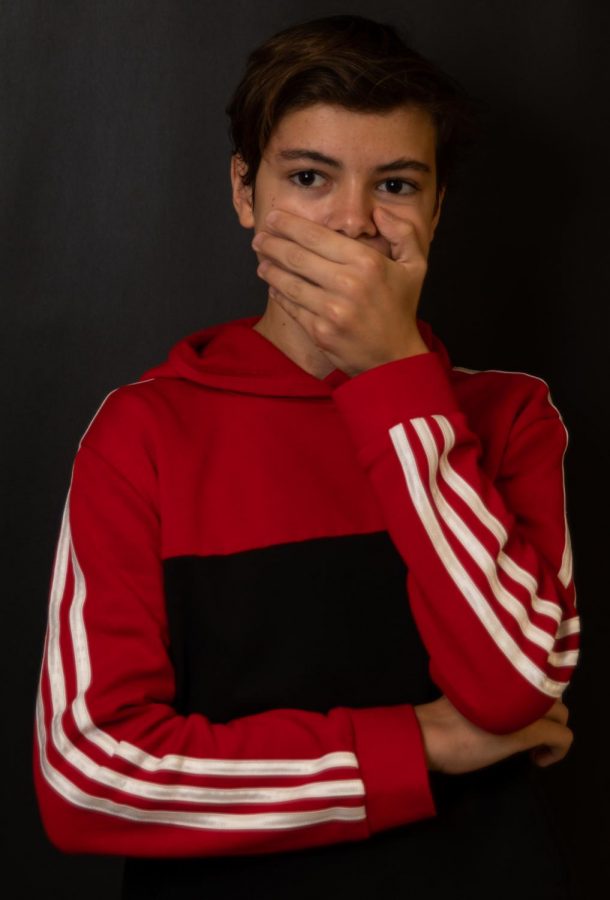 “That (embarrassing) event is currently stamped on to you”: Student fear of standing out at school

Students discuss how fear of embarrassment inadvertently discourages standing out

Whether it’s wearing that puffy winter coat to school for the first time or simply carrying a lunchbox from class to class, the dread of sticking out in a crowd is not a foreign feeling for some high school students.

Simple actions such as these are normal, but students can be embarrassed regardless. Armani Bearden, sophomore, knows this dreadful feeling of shame all too well.

“My thought is to get to my first class as soon as possible so I don’t have to carry (my lunch box) around,” Armani said. “Also that, hopefully, nobody sees me and the hallways are abandoned. It’s almost as if I’m walking around carrying a plushie, but nobody else is.”

The fear of standing out is a familiar and recurrent issue among students. In a recent Crier survey of 297 students, two in three said they have felt afraid to stand out at school. The collective consensus is that standing out provokes others to make fun of them.

The repercussions from this embarrassment contribute to the unease that students encounter on numerous occasions. Sticking out may attract unwanted attention. Students may then see this as a cause to refrain from being noticed and avoid the possible scrutiny from their peers.

“If there’s an instance where we get embarrassed in school, we know that people might remember the situation that happened,” Charlie Ilijevski, freshman, said. “When we interact with a certain person, you don’t know if they’re thinking of that situation while they’re talking to you. That (embarrassing) event is currently stamped on to you.”

As a result, students are encouraged to conform to the norm. Adolescents struggle to figure out their own identity at this stage in life. As this struggle grows, so does the need to meet standards set by others or possibly face being made fun of.

“It’s not so much the act of standing out itself, it’s just that (people) don’t want to be made fun of because high school kids usually tend to talk about people that aren’t like them,” Peyton Reynolds, sophomore, said. “I think that (the fear of standing out) definitely develops in middle school, but I think the lower grades want to be cool to the upperclassmen, who probably don’t really care as much.”

Many can become distraught by what seems to be the eyes of the entire student population observing their every move. Feeling as if others will notice all their embarrassing moments may keep students from expressing themselves fully. However, some seniors do not feel as apprehensive as others to stick out in the crowd with the knowledge that next year, they will not be returning.

“I don’t usually (care) about what other people think,” Nathan Crocker, senior, said. “For me, it makes sense to wear a coat, but I could see why some people might not like the aesthetic.”

Even so, embarrassment at school does not only concern the clothes that one chooses to wear. Several students have reported overthinking and hesitation when it comes to answering questions in class. This reluctance leads to self-doubt from students and lack of participation in the classroom.

“In math, sometimes I think I know the answer, but then I doubt myself,” Emily Li, sophomore said. “I’ll be embarrassed to talk about stuff because I think, ‘Oh, what if I say something and then I’m wrong.’”

The pandemic has only added on to these challenges, and caused an abrupt increase in anxiety. As in-person learning commenced, interaction with others as a whole proved to be a tremendous change from the previous year of social isolation.

“Especially (with) eLearning, turning a mic on and talking, I would feel embarrassed,” Charlie said. “It’s mostly because I’m overthinking about how people are going to react or what other people are going to think. I’m still getting used to interacting with people again and talking out loud, so sometimes it can be a little overwhelming.”

Despite the anxiousness students feel, many students share the same central viewpoints on this topic. There are other high schoolers who share the same hesitation and anxiety when it comes to embarrassment. Evanthia Fotopoulous, sophomore, believes that students should strive to be unafraid to embrace their individuality.