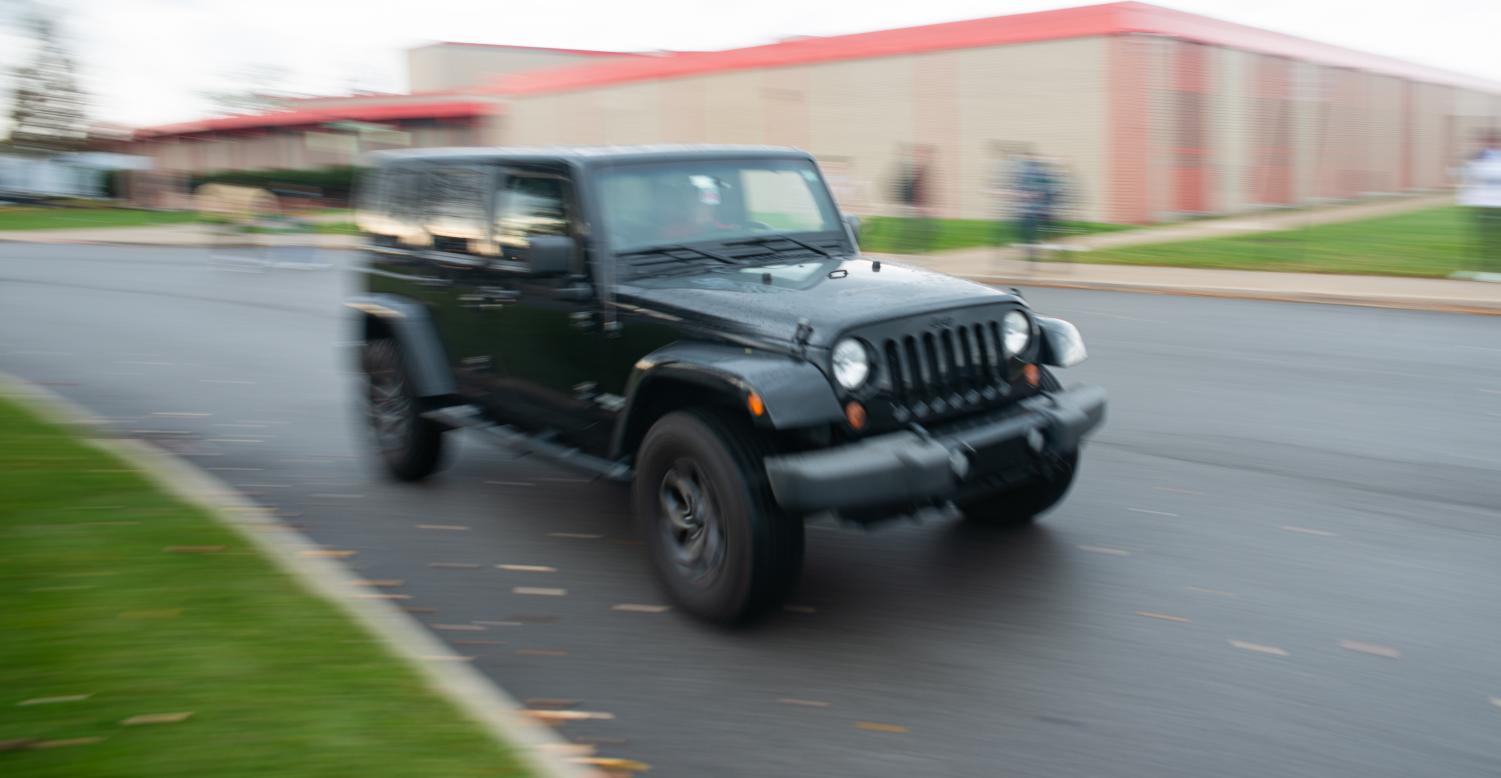 DRIVER’S SEAT For many students, the South parking lot has become a place of chaos both before and after school. With the number of crashes on Calumet and throughout Munster, the fear of driving is prevalent as more and more accidents reach the ears of students. (Anthony Young)

DRIVER’S SEAT For many students, the South parking lot has become a place of chaos both before and after school. With the number of crashes on Calumet and throughout Munster, the fear of driving is prevalent as more and more accidents reach the ears of students.

The dread of the drive: students discuss fears of driving and their personal experiences

The overwhelming feeling of dread rising up in her throat, and the sudden onslaught of alarm. This is what Jocelyn Lemus, junior, felt the night that she was told her dad, a truck driver, got into an accident. The initial thought of disbelief quickly turned into pounding anxiety that night, and suddenly, driving had never seemed more terrifying and unattainable.

“Just seeing him in the hospital bed and not being able to see him (in person) because he was in Indianapolis at the time—it hurt. It was horrible,” Jocelyn said. “Luckily he wasn’t hurt to an extreme. (The first few days after), I was more worried about my dad and his injuries in the accident. But then once it came around to me learning how to drive—that’s when the fear really started.”

Facing constant pressure by her peers to start driving as soon as possible, driving for Jocelyn has never been as simple. Yet, her life is largely centered around driving—the fear she tries to squash down as her father leaves each day for work and the feeling of unease overtakes her at the mere thought of driving. Not only does the mere thought of being behind the wheel bury her, but even being in one has her squeezing her eyes shut.

“I’ve always kind of been afraid,” Jocelyn said. “But it wasn’t until that moment where the fear really struck me, especially since I was going to get my permit within the next few months. It was kind of an eye opener. I’ve only driven a couple times (now), but the idea and actually doing it is terrifying. You always have to watch your surroundings, of course, but there’s also other people’s lives on the line when you’re driving.”

The many accidents on Calumet and throughout Munster—the history of Munster Donut crashes, the hit at Commander’s and the most recent Jodi’s accident—leave a sense of dread in students. On Nov. 7, students were faced with the reality of driving dangers when William Earls, senior and beloved student, passed away the day prior on the highway south of Crete.

“(Calumet) is the one street I refuse to drive on,” Juliette Miranda, junior, said. “I’ll drive down the main road but if I want to go to a place like Panera, someone has to take me because I am not driving there.”

The impending fear of a crash is easy for many to ignore when the fear is not personal; most teenagers view driving with a rushing, eager sense of excitement. But for others like Jocelyn, whose livelihoods revolve around such an imminent fear, there is a large difference between those who have been influenced by a crash versus those who have not. Juliette can attest to this.

“I think I was in two or three car crashes,” Juliette said. “After the (first accident)—I was around 10—I started to notice drivers and what they would do. Eventually, I would notice what the road signs meant and what the yellow lines meant without anyone having to tell me. I’ve gotten into a couple near accidents already. I know if I probably get into an accident—meanwhile I’m driving and it’s a bad one and the airbags go off—I do not think I would be able to get behind the wheel again for a very long time.”

It is no secret that driving is dangerous—but it is especially exacerbated by teenage drivers who have less experience. According to the CDC, around 2,400 teenagers in the United States were killed in 2019 due to a crash, and 258,000 treated due to injuries. The risk of car crashes are highest among teenagers between the ages of 16-19.

“I think that teen drivers can be a bit more reckless because it is a new freedom,” Jim Ferguson, junior, said. “Driving with their permit you need to be a little bit better about the law when you’re with your parents. But when you get your license someone’s not always nagging you. With teenagers, it is basically up to their morals and how they interpret the law.”

In the moment, according to Mara Trivunovic, senior, your feelings and thoughts when driving can change in an instant. Getting into an accident leads to a reevaluation that would not be otherwise experienced. Suddenly, the panic and hectic feeling of running late to an event fades, and is replaced by relief.

“It was 5:45 p.m. and I had to be somewhere at 6 p.m. and I’m on Main Street—so I was like, ‘I just gotta go,’” Mara said. “But in the moment (of the crash), I was just like, ‘I messed up.’ Like, it is not that big a deal if I’m late. And then afterwards, I am just always like ‘Alright, Mara, just drive normally, because it is not that big of a deal. I definitely drive much safer (after having these experiences).”

Among high school students who drove, 39% texted or emailed while driving at least once during 30 days before a CDC survey was sent out. Additionally, the CDC found that teenagers are more likely than older drivers to not follow the speed limit. According to Victoria James, junior, this is the worst type of fear—someone else’s reckless actions spurring the injuries of others.

“A couple weeks ago, we saw somebody cut around us and go into another lane of traffic just to get ahead of somebody because they weren’t accelerating fast enough,” Victoria said. “I’ve seen some car accidents and usually it’s always one person instigating by being reckless. And it’s just hard (to see that). You can just see yourself being one of those people in the crossroads.”

The thought of driving either takes the form of constant fear or reckless freedom. Teenagers are quick to find a high on this new sense of freedom, according to Jim, and due to the nature of teenage driving being more risky, there have to be more steps someone can take to ensure their own safety.

Me and my sister were driving into the intersection by 45th and Calumet and I ended up crashing. I was terrified. I was crying on my way to school, and then afterwards I just did not want to drive. ”

“I have never been scared with someone driving in the car because I only allow myself to be put in the car with a friend that’s driving that I know drives well,” Jim said. “There have been times where I’ve refused to ride with someone and I was like ‘No, I’ll just drive myself,’ or something, because I didn’t think they were a safe enough driver for me and I wasn’t comfortable with it.”

When students hear about peer pressure, the first thing that comes to mind likely is not driving. However, this is a real issue students face—they are often caught between not making a scene and allowing themselves to enter an unsafe vehicle, or risking a friendship by being straight with their uncertainties. But having the courage to stand up is an undertaking students must go through, and prioritizing safety is important in a world that does not do so, Jim emphasizes.

“I think that if people were more aware about it, everyone would kind of take it seriously.” Jim said. “If I were to tell my best friend, ‘No, I don’t feel safe with you in the car,’ I think they would kind of learn that as a lesson. I think, honestly, the best thing for them is just to tell them the truth.”