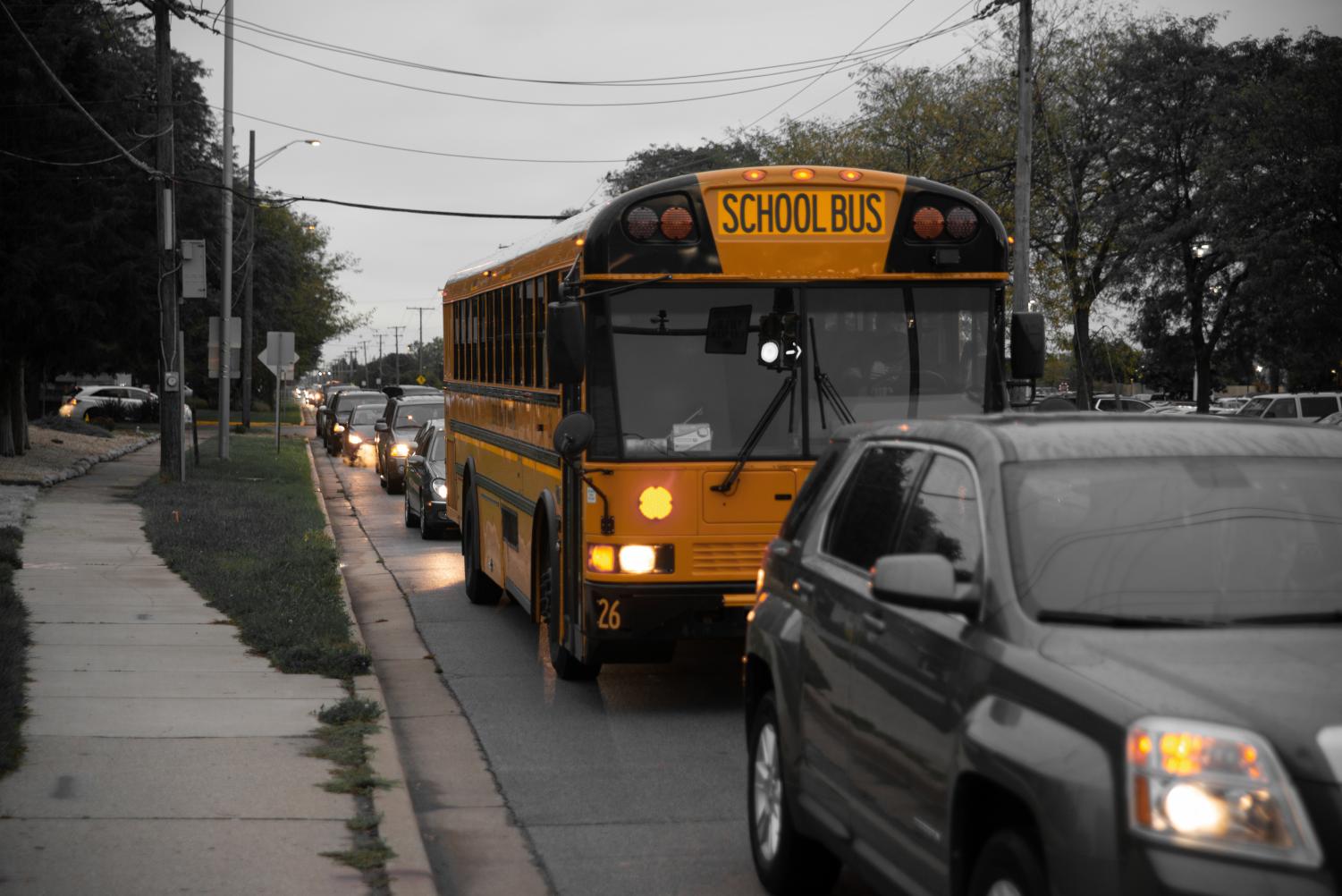 7:20 a.m. at the intersection of Fisher & Columbia (Anthony Young)

7:20 a.m. at the intersection of Fisher & Columbia

Students and parents experience an increase in morning traffic, Crier investigates why

Nervously checking the time, Hannah Loredo, sophomore, sits in the car as it slowly lurches forward through the traffic on Columbia Avenue. Despite living two minutes away, she tends to make it to school with a minute left to spare. Worrying about her attendance, she can do little but speed up her pace while walking to first period. Columbia Avenue, Calumet Avenue and Fisher Street are clogged with traffic almost every morning, starting at 7:12 a.m. From bus schedules to school start times, the traffic issues could be caused by a myriad of accumulating problems.

“I feel like the traffic is not something I should be stressing about as much as I do,” Hannah said. “I have to wake up so much earlier compared to past years, it’s ridiculous.”

Some specific problems that people have noticed are that buses go down Columbia Avenue after dropping off students, which slows down the line of traffic. Also, a majority of students get dropped off at door A, off of Columbia, even though door J is another option. The people who go to door A usually struggle with the fact that there are cars driving north and south on Columbia Avenue. Watching the traffic unfold from her car, Sophie Salazar, sophomore, explained that the conflicts start when both lines try to turn into the front of MHS.

“I usually leave 20 minutes before school starts, but due to traffic, I usually have only a few minutes to get to class,” Sophie said. “Traffic is a big cause of my tardiness, and I tend to start my day stressed because of it.”

For students who live in neighboring cities and subdivisions at the far ends of Munster, the traffic has made it increasingly difficult for these students to arrive at school on time. The construction on Calumet Avenue and the bridge that connects Munster and Hammond on Columbia Avenue being closed has also affected student’s ability to make it to school on time.

“I’ve been living in Hammond all my life but I didn’t start going to Munster until 6th grade,” Kameryn Hubbard, sophomore, said. “My older sister, who is now a junior in college, has done the same, and traffic has only gotten worse. We sit in traffic for a minimum of 10 minutes. From being inside the car to just trying to cross the street, there is absolutely no direction with car or bus drivers.” 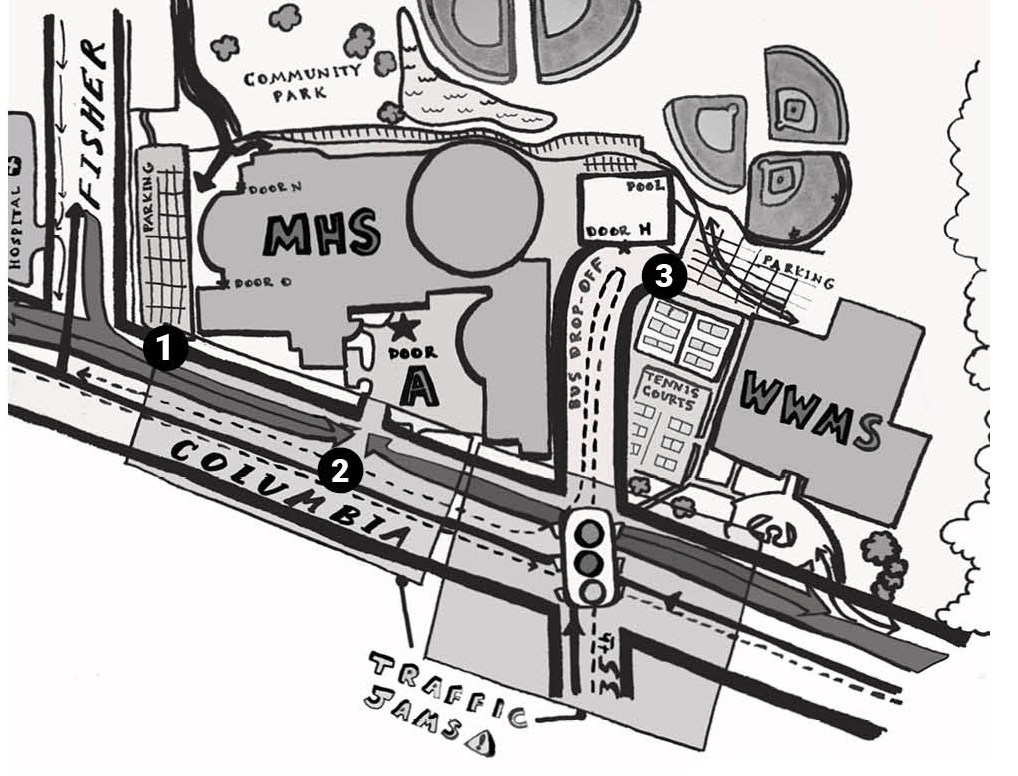 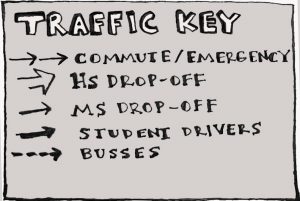 When discussing the issue, Officer Gabe Isenblatter, resource officer, mentioned that no one expected Munster to get as large as it is, with a population of 22,476 (as of 2019) and 7.637 square miles of land. A more feasible design, he explained, would be building the school so that Community Park and the football field would be switched, which would offer more parking for students. Since Columbia Avenue is a main road and MHS is next to Community Hospital, emergency vehicles and people on their commute to work also get involved with the school morning traffic. Crier contacted Central Office to get information on their traffic investigation, but could not reach them by press.

“I think if more parents dropped their kids off in Community Park and had them walk across the park into the school, that would alleviate most of the traffic issues,” Officer Isenblatter said. “Most parents seem to be reluctant to make their kids walk that distance and prefer to drop them off closer to a door.”

With the current traffic issues, students have had to wake up even earlier to make it to school on time. Kameryn mentioned that she leaves at 7 a.m. on Mondays, Wednesdays and Fridays due to construction. Another possible issue could be that school starts five minutes earlier, and students had to adjust. Other students say that the buses turning on Columbia Avenue after dropping off students, the middle school’s drop off protocols and the general flow of traffic are the root of the problem.

“I think with the middle school only being able to drop kids off by driving behind the high school causes for a lot more unnecessary traffic,” Otto Hoehl, senior, said. “The traffic has always been bad, but you just have to try and leave earlier.”

Another huge issue would be where Fisher Street and Columbia Avenue intersect. The turn lane is too short, therefore cars cram into the small area in an attempt to arrive at school quicker.

“It would be quicker to walk but it’s starting to get colder outside,” Ethan Loredo, sophomore, said. “I try to leave earlier but I still end up rushing. It’s frustrating because there’s not much I can do about the traffic situation.”