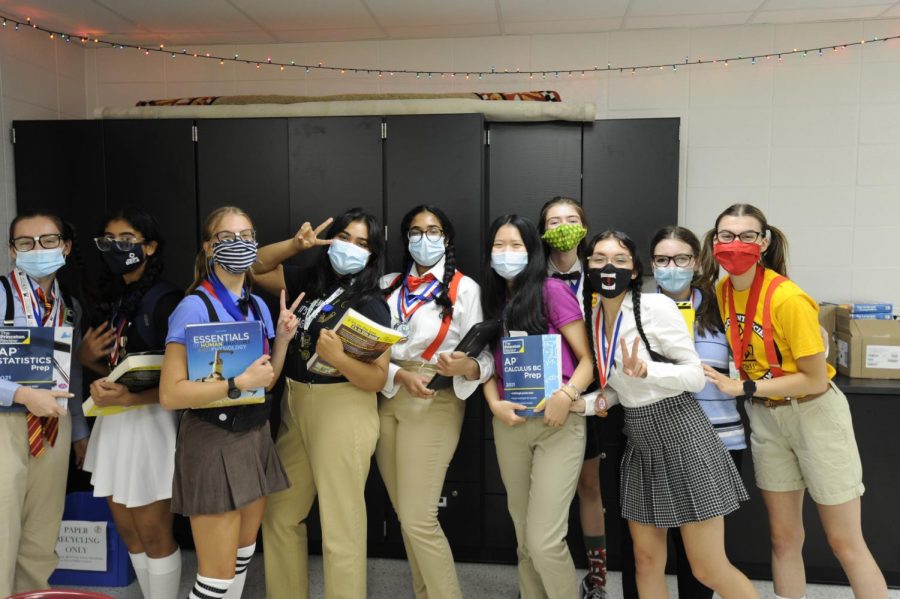 Waiting for a dance: students look forward to the first dance since Turnabout two years ago

Between finding a group to go with, and figuring out how to tailor her dress, Khusi Jhaveri, senior, has her hands full for Homecoming. Like other students, preparing for the dance tomorrow has given her a night to look forward to.

“This dance in general is another way to show school spirit and that you’re supporting school events,” Khusi said. “Whether that be through the pep rally, the parade or the dance itself, you’re taking pride in where you’re coming from and there’s just something really special and uniquely high school about that.”

Though Homecoming looks different this year due to changes brought on by COVID-19 related precautions, students remain excited for the dance. Among these changes is the plan for a virtual pep session like last year, a collaborative effort between Film Club and Student Government. The video will be played during MRT today.

“(It’s important to have a video) so we know what all the different clubs are in the Fall and who to talk to if you have any questions about it,” Alyssa Sangueza, senior and Film Club vice president, said.

Paralleling the twists of last year, Homecoming will be held in the same place as Prom—between the tennis courts and North classrooms. Though the outdoor aspect has left some students feeling underwhelmed, it is also a chance to redefine their idea of what Homecoming is, according to Mrs. Kathleen LaPorte, social studies teacher and Student Government sponsor.

“It’ll be an opportunity for everyone to get dressed up if they want to, or even go a little casual,” Mrs. LaPorte said. “But to have some type of memory (all the same). Obviously, I love to dance in the gym, it’s the biggest one we put on. But we can’t ignore what is still happening within our own community and the comfort level for kids.”

For Student Government, the challenge is creating an environment that has all of the elements of a dance that make it fun, while also keeping students feeling safe.

“I think it’s important for the student body to have a Homecoming, because of the rough year we had last year,” Jonathan Bryson-Harvey, senior and vice president of Student Government, said. “A lot of our students weren’t able to experience the normal high school experience. So, it’s important to really try to get those this year because we have limited time here.”

The plan for Homecoming has been one of constant adaptation and change. Despite this, students are excited to have a dance at all. For Khusi, the process of preparing for a dance, even if it is substantially different from before, is worth the effort.

“I think that it’s a way of adapting to the situation,” Khusi said. “It’s really possible that there could have just been no pep session, no parade, anything. Having the spirit week and the virtual pep session still tries to make it more normal, while still adapting to these circumstances within the pandemic. I think it’s really cool for the administration to do that when they could have done nothing.”