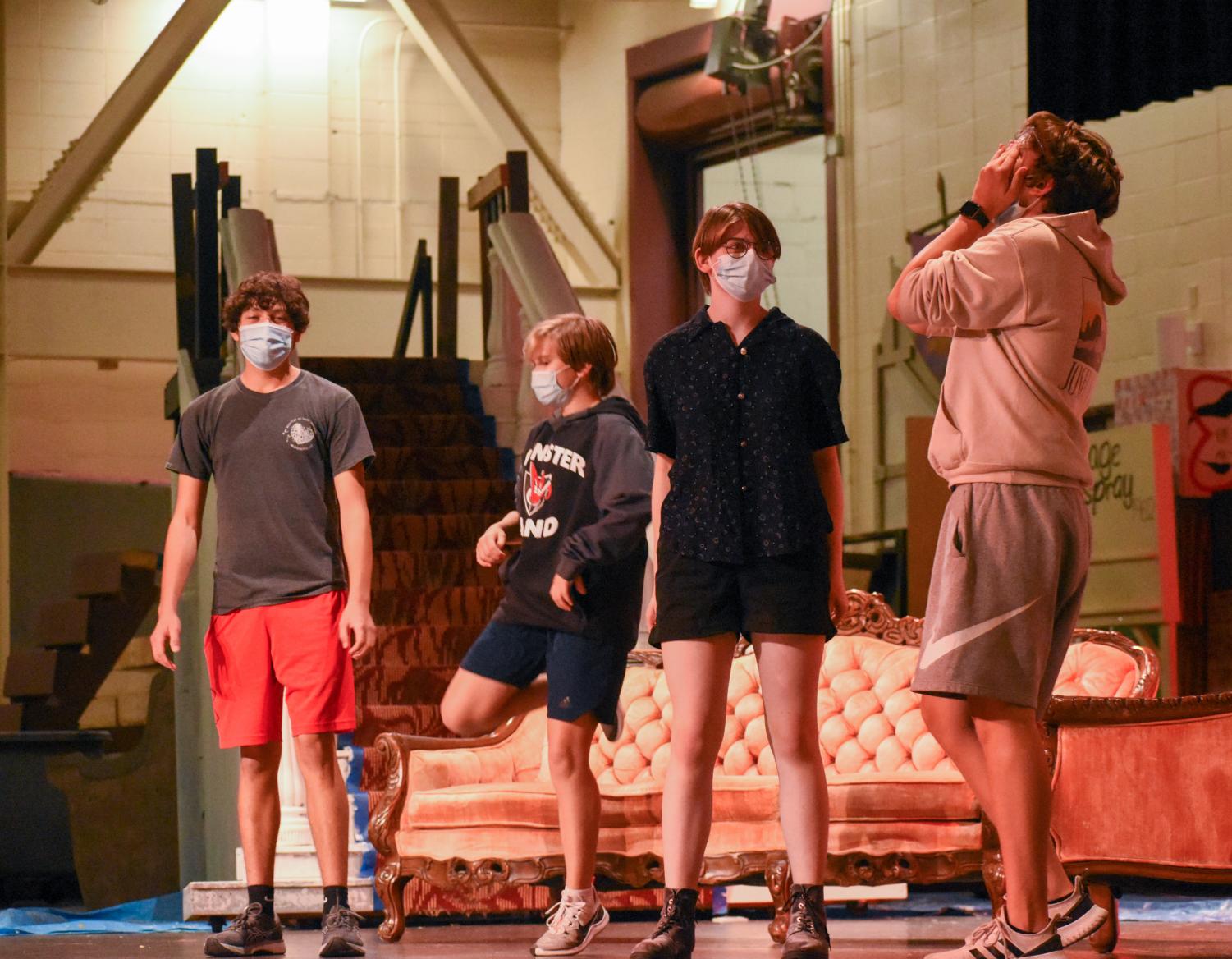 LOOSENING UP Dancing, running, jumping and stretching, Joey Hladek, sophomore, freshmen Charlie Ilijevski and Evvy Kikkert, and James Ferguson, junior, warm up on stage before beginning rehearsal. Theatre warms up as a group to prepare both their minds and bodies to get into character. “We just run through different acts (and) then we have a little powwow at the end,” James said. (Kristen Baurain)

LOOSENING UP Dancing, running, jumping and stretching, Joey Hladek, sophomore, freshmen Charlie Ilijevski and Evvy Kikkert, and James Ferguson, junior, warm up on stage before beginning rehearsal. Theatre warms up as a group to prepare both their minds and bodies to get into character. “We just run through different acts (and) then we have a little powwow at the end,” James said.

In the spotlight: theatre members rehearse and prepare for upcoming play, “Harvey”

3 p.m., Sept. 8. The auditorium lights flicker on. A number of students flood in, immediately filling the mute theater with excited, eager voices as rehearsal begins for the day.

“(My favorite part of rehearsal) is being around everybody,” Clara Dumaresq, sophomore, said. “I’ve had problems fitting in, so (Theatre) helped a lot. These are some of the greatest people I’ve ever known. (They) are so accepting and so different from everyday people.”

3:07 p.m. Props and furniture moving left and right, the entire Theatre staff—actors, tech crew, hair and makeup—begin setting up the stage. After weeks of practicing lines, today’s rehearsal is the first off-script enactment of “Harvey.”

3:34 p.m. Today, members of the staff get their headshots taken to be displayed on the walls. As members slowly gather on stage in the meantime, they begin their stretches and warm ups. Warm ups typically vary from loud shouts, tongue twisters, sirens and simply running.

“(My favorite part of rehearsal) is probably warm ups,” James Ferguson, junior, said. “I wish (rehearsal) was more than three times a week.”

3:42 p.m. By now, everyone is done with their headshots. The entire staff is sitting on the stage as Mr. Raymond Palasz, director of Theatre, discusses updates. Today, the dreaded horror felt by every staff member finally comes to pass, as Mr. Palasz announces that due to the school entering stage 3, the live performance they hoped for may be out of reach. However, Mr. Palasz is still determined to see this play live, discussing options such as holding the play outside or even in a few months.

“I just really want (this play) to go smoothly,” Chloe Sarkady, sophomore, said. “It’s our first play since our stream (plays). I just want everyone to feel like a cast again.”

4:14 p.m. With the actors still on stage, Mr. Palasz does a different exercise than the norm. In an attempt to bring out the students’ “creative genius,” he splits the actors into groups, with one person from each posing next to props. Through this experience, students get to work in teams to capture a scene on the spot.

4:42 p.m. The actors aren’t the only ones putting their all into creating a story. At the back of the auditorium, the tech crew is working hard. Near the light and sound equipment, sophomores Kyle Farnell, Robert Brunetti and Seamus Keegan sit, working on adding lights and cues into the script.

“(Theatre gives me an opportunity) to be able to use my talent to help,” Kyle said. “(The lights) give the show life.”

4:42 p.m. An integral part of producing life on the stage involves putting life into the characters—hair, makeup and costumes. “Harvey” is still in the beginnings of its production, so aside from the occasional dance party, the makeup staff is often working on mapping out face shapes and learning different techniques.

“Makeup comes easy to me,” Clara said. “You have to pay attention to the time period (and) ages of all the characters and their personalities.”

4:43 p.m. Back on stage, the actors disassemble their practice exercises and begin their first off script line reading for “Harvey,” starting at the top of Act 1, Scene 1.

“My biggest goal is to have a well put together show—which I know is going to happen,” Jordan said. “It’s a great cast and I just want to have fun performances.”

5:14 p.m. The reading finishes and Mr. Palasz calls everyone to reconvene on stage. Reviewing the day, Theatre members discuss their progress and set goals to improve their performance.

“My goal is to embody the role since the play takes place in the 1900s,” Ini Edet, sophomore, said. “It’s kind of a different acting style than I’m used to, because I’ve either done a very recent or very past (time period).”

5:17 p.m. Theatre rehearsal concludes, with the “Harvey” premiere date uncertain. Everyone disperses with a feeling of determination to enhance their performance. The lights shut off, cloaking the room in a familiar darkness that marks the end of rehearsal..

“In a week, month, year, we’re going to do this show,” Mr. Palasz said to the students. “For a number of you, coming here for two to five days a week and putting the minutes in is not just something you do…working on the show is part of who you are. I want the audience to see that.”