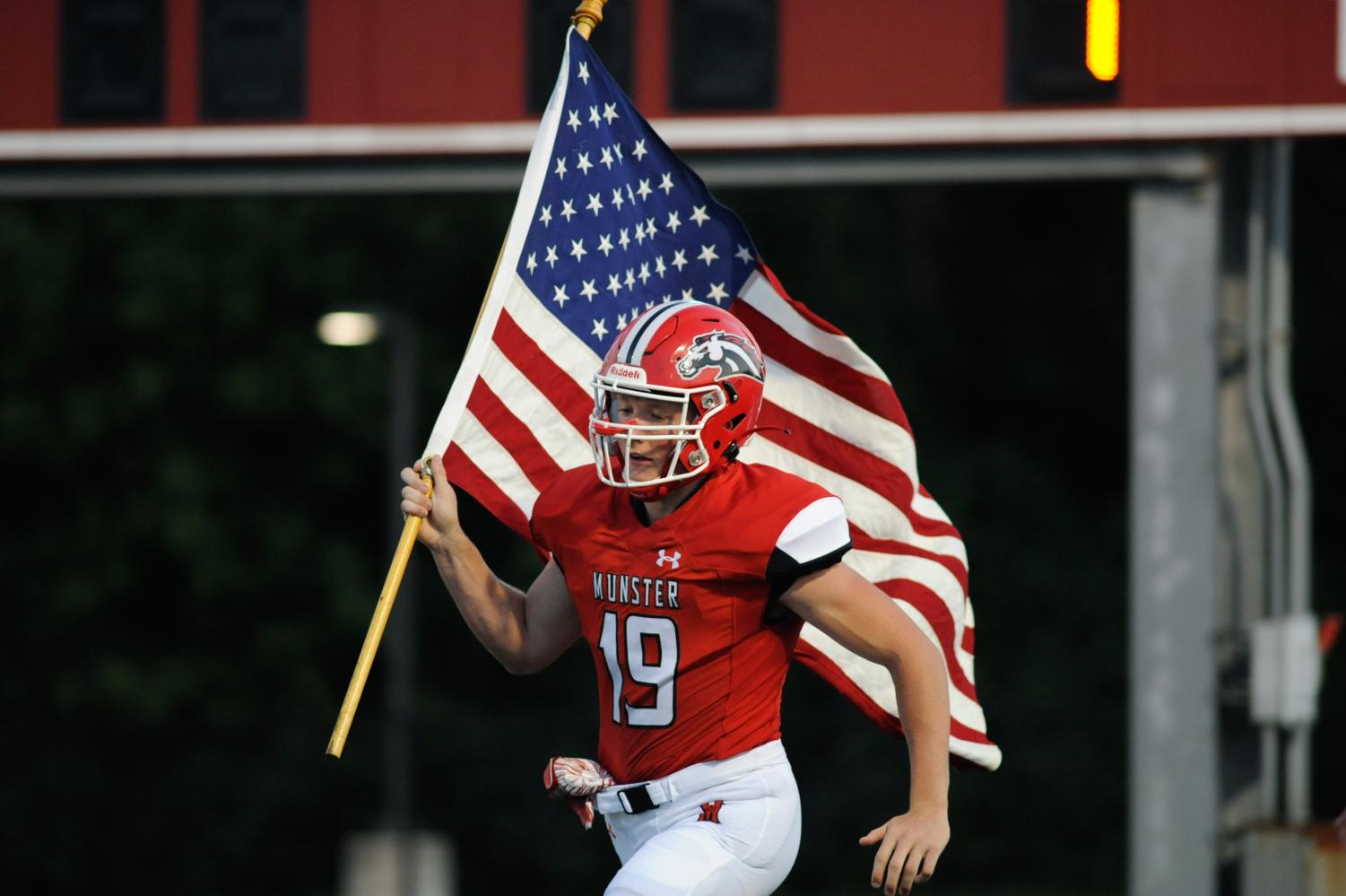 RAISING THE FLAG As the crowd roars, Thomas Choros, senior, carries the American flag in front of the team. Football was ecstatic to play at home against Hanover Central on Aug. 27. “The boys were all buzzing and were ready to hit,” Choros said. “Personally, I was ready to run through a wall.” (E.J. Boersma)

RAISING THE FLAG As the crowd roars, Thomas Choros, senior, carries the American flag in front of the team. Football was ecstatic to play at home against Hanover Central on Aug. 27. “The boys were all buzzing and were ready to hit,” Choros said. “Personally, I was ready to run through a wall.”

‘This is who I’m playing for’: Football returns to full-capacity games, plays against East Chicago Sept. 3

With a home game against East Chicago Central tonight, and a record of 0-2, Football faces their third home game of the season with the rallying support of enthusiastic students

The familiar rumble of feet on bleachers and the roar of a crowd. The smell of concession stand food wafting around as supporters yell their encouragement. This was the scene of Football’s first home game Aug. 20, and was what Eddie Lewis, senior, missed the most about playing.

With the team now having a record of 0-2 and a home game against East Chicago Central Sept. 3, Lewis hopes to continue to experience that same energy for the rest of the season.

“I was looking forward to getting back in that atmosphere,” Lewis said. “I had to take my junior year off because, due to covid, my mom wouldn’t let me play. So I’ve gone a whole year without seeing my boys, my coaches and everything. It sucked. I just missed that atmosphere—the smell of popcorn, people yelling and (Coach James) Grunewald getting mad. It was awesome.”

The attraction of the Friday night lights atmosphere is not limited to just the team: each game eager students have filed into the student section bleachers, costumed in whatever theme is announced prior. The student section plays a pivotal role in school spirit, according to Louis Wolf, senior and one of three owners of the MHS student section Twitter account, @MHS_SS2019. The account is also run by seniors Allan Dedelow and Tyler Lukowski.

Whether it be the antics of student supporters, the jazzy pomp of the pep band or simply dressing in school colors, students now more than ever are aware of all aspects of the game that makes the night so memorable, and are grateful for it.

“(My favorite part of the games are) probably interacting with the student section and the band,” Marissa Slivka, senior and cheerleader, said. “Although we are thankful for the parents and staff that came out to games last year, the football team was missing the motivation and support of a full crowd. This made our job as cheerleaders that much more important. Walking into the first game, you could feel the energy and excitement in the air.”

ROUND UP all the desperados and desperadas… the STANGS heard the mutton-punchers of Hanover will be coming to town this Friday… Showdown starts @7… Theme…Western pic.twitter.com/Yg1iSOLw2j

For the team, strong student presence was a noticeable transformation in comparison to last year’s games, and the return to MHS’s Friday football culture is a change they are excited to see.

“It gives us something to play for,” Zach Lenaburg, senior, said. “When there’s no one in the stands, you’re kind of just like, ‘Wow, I’m really just playing for myself and my team,’ which we have been (doing) and we always do, and I’m proud of that. However, when you have that student section there, you feel more school pride. You feel like, ‘This is who I’m playing for. This is who I’m winning for.’”