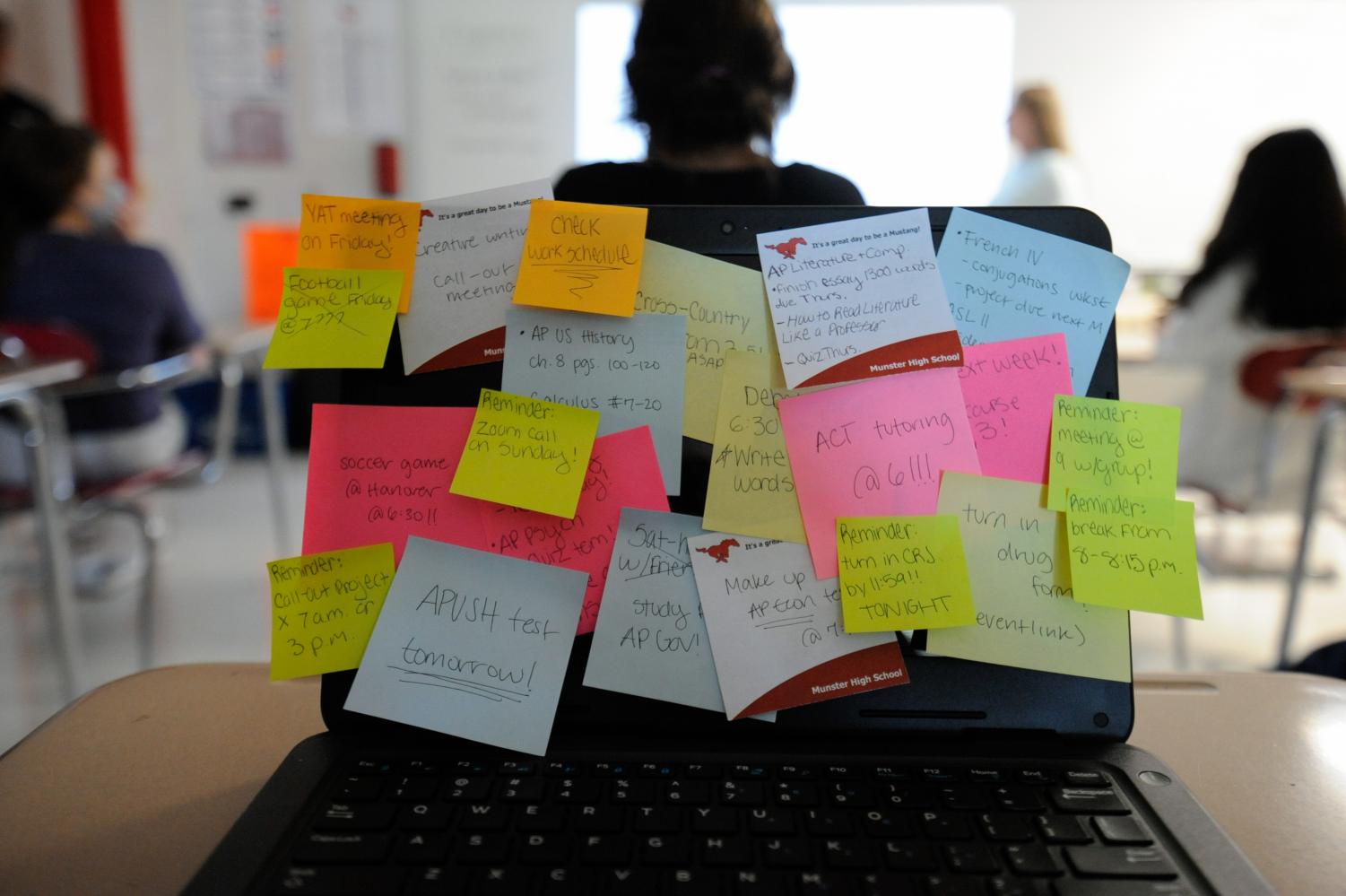 INFORMATION OVERLOAD Attempting to navigate another school year, students face an overwhelming load of content in a shorter amount of time, the skills lost to COVID-19 hitting hard. (EJ Boersma )

INFORMATION OVERLOAD Attempting to navigate another school year, students face an overwhelming load of content in a shorter amount of time, the skills lost to COVID-19 hitting hard.

Backed into a corner: students adjust to the return of a traditional schedule with lingering feelings of uncertainty

As the new school year progresses, both previous eLearners and in-person students tackle issues such as procrastination, sensory overload and a packed schedule

Notebooks and folders pushed to the side, Juliette Miranda, junior, frantically rearranges and color coordinates her closet, reassuring herself that she will get to studying in just a bit. She is still being productive, right? A month into the new school year, she finds herself feeling backed into a corner.

With the return to an 8-period, a heavy workload and continuous color guard practices, late nights were the only option for Juliette in order to have time for her various hobbies.

“(The traditional schedule) is really just forcing me to get (work) done now,” Juliette said. “(Before), I didn’t have to worry about staying up until 4 a.m. to finish (homework).”

Despite hopes of going back to a normal year, for many students that sense of normalcy seems far out of reach. From spending the hours waiting for the time to hit 2:35 p.m., to being thrown back into a hectic, work-till-the-bell schedule, student struggles are vast and consuming.

“Now that we’ve gone back to a regular schedule, everything feels too rushed,” Violet Luna, senior, said. “It takes me a while to fully focus. Then once I have, it feels like only 20 minutes have gone by and it’s already time to leave. Going back to school was a bit of a sensory overload with the entire school (there).”

Whether they were previously eLearners or in-person students, learning to readjust senses to a 50 minute class period, relearning new communication skills lost during quarantine and managing time with various extracurriculars is a conflict shared by nearly everyone.

“I would manage my time (with the block schedule),” Georgiana Manojlovic, senior, said. “Now, I have seven classes of homework I have to do in one night. On top of that, extracurriculars don’t help because before, I was able to not do my homework that night, (but) the next night.”

Though last year’s block schedule was not a true example of a traditional block—MRTs would would have been shorter and classes primarily dedicated to further teaching—it has led to many students feeling the enormous impact of this school year. Each grade level has their own experience—seniors, their only real time with AP classes being in a block schedule setting, juniors, still feeling as though they never left freshman year, and underclassmen, flung into a new environment without many of the skills or preparation needed to do so. For some, this adjustment has led to unexpected 2 a.m. work nights, hours of procrastination and overwhelming stress. For others like Juliette, this forced adjustment back to a regular period has left students with only one option.

The adjustment has its own benefits as well as its pitfalls, depending on the subject area. The increasingly alarming late nights are a cause of concern for many students. These skills are a learning curve for everyone, and students are working hard to deal with the implications of the new year. This includes reevaluating goals, and taking things one step at a time.

“(This year), I’m trying not to let stuff get to me as much if I get a bad grade on something,” Juliette said. “I’m just gonna say ‘Okay, that’s just one bad grade. I’ll do better next time.’ I’ll study harder, I’ll do whatever it takes, but I’m not beating myself against the wall this year like I did last year.”