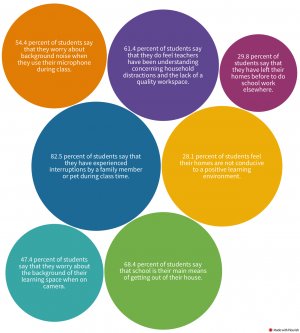 Interruptions are nothing new for Jaylin Turner, junior. Sharing a room with three younger sisters has wrought numerous instances of trial and aggravation. However, Jaylin has discovered eLearning to possess its own set of challenges.

“There’s always something going on in my house,” Jaylin said. “(I experience interruptions) at least five times per class. My sisters do their school stuff in the front of the house, but they try to come in during the day. I don’t let them because I can’t focus if they’re in there—between all of them, someone’s always knocking on the door asking for something.”

Jaylin’s struggle has been one that many students have become familiar with, even those without numerous siblings, or parents that work from home. Being at home in itself is a concept difficult to compartmentalize for students.

“I left for a week to go to my aunt’s (house), because I just could not stay focused,” Bailee Dejarlais, junior, said. “I thought it would be a better learning environment there instead of just the same old basement. I feel like I focus more there because it’s just a different environment, and I wouldn’t be as bored or distracted with things in my household. My grades actually went up a bit because I took a few tests there. I was more focused on them and more determined to study.”

Overt household distractions, though damaging, are not the only unfamiliar challenges students have faced. Emphasized by the temporary total shift to eLearning, which was enacted from Nov. 13 and lasted until Dec. 2, MHS students have said that their home dynamic is more isolating than before. As an original at-home learner, Otto Hoehl, junior, is extensively familiar with the isolation of learning at home, and the effects it has on learning quality. Despite having two sisters that also eLearn, and a parent that works from home, Otto said there is little interaction among them.

“I don’t see my older sister ever during the school day,” Otto said. “It just makes the household a more negative place in a way. It’s kind of gloomy. I get to leave my room, and I’ll see everybody else eLearning or online doing work, and it’s just disappointing. When I’m going downstairs I’m taking a break from school but I’m not really getting away from it.”

The at-home disillusionment that has induced a lack of motivation is not lost on the student body. The disconnect between school work and the school building has become a pervasive reminder of the rapid, ongoing changes educators and the educated have been dealt.

“It doesn’t feel like I’m even at school,” Jaylin said. “It’s like I’m at home. I’m just sitting at my desk watching a teacher talk—I can’t even focus because I’m in my own room, I’m not in a classroom. It makes the amount of motivation I have to do anything related to school go down the drain.”

A school away from school 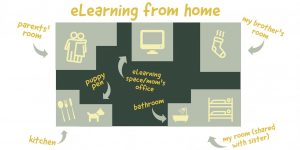 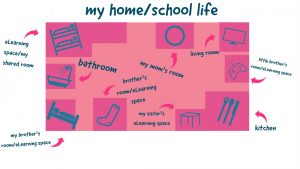 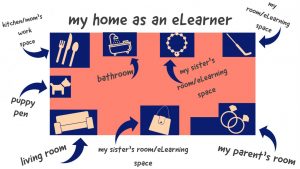 Interruptions at home have taken a multitude of forms, one of the most prevalent for students being pets. For junior Keira Hawk, taking care of her newborn puppy has become another responsibility that works against her class time.

“I was taking an Algebra II test, and she was being so rambunctious in my room,” Keira Hawk, junior, said. “She was literally running everywhere, but I couldn’t leave her by herself because I was afraid something would happen to her. I’ve probably taken three tests where she’s been in the room, and she caused a distraction. I was still able to get a good grade, but it really stressed me out.”

Students with a multitude of pets have also discovered the added pressure that comes with the added distraction.

“I have three cats and all they do is bug me during the day,” Bailee said. “One of them is so needy, she sits on my chair and just stares at me during class. She whines for food (which is) really distracting. All of them are always meowing, and it’s just like ‘go away.’ Then I have to go upstairs and give them treats, and then I (worry) if I miss something, or if someone calls on me. They get really annoying.”

Some students have been forced to reckon with even deeper disadvantages associated with eLearning, not only dealing with distractions from home, but an overall reduction in quality of learning. Incommutable factors such as a poor wireless connection or little space for learning are a far cry from typical familial or pet-caused distractions. This dilemma is only further emphasized by the disconnect between teachers and students.

“It’s very difficult to deal with trying to take a test or something,” Jaylin said. “And then there’s teachers who will get angry at you if you look like you’re talking to someone else or if there’s someone else in the room, (but) I can’t do anything about that. (We are told that) we need to go into a space where there’s not going to be a lot of distractions, (but) everybody doesn’t have that amount of space.”

Another deep-seated hindrance to learning students face is the dynamic of online learning itself. Lack of student participation has been a common issue teachers have observed among online students. Though it can be a blatant disregard for teachers’ efforts, some students say the reasoning behind not participating is more complex.

“I have to turn my camera on, turn my microphone on and everyone’s getting a close-up of my face,” Otto said. “I’d rather try to go without really understanding the subject rather than seeking help. It feels more judgmental online. I feel more insecure, because I feel like I’m getting judged off of how I appear on screen to everybody, whereas in school I can show my personality a little bit. Online, you don’t get to express yourself. (It’s unnerving because) you’re not seeing anybody else. You don’t know what they’re saying and it just feels like you’re being judged.”

Though the new dynamic of eLearning has hindered students through numerous distractions, students have also found fresh ways to perceive the consistent changes.

“(The shift to eLearning for me has) changed positively, because I get home from morning practice at like 6:45 and I’d be scrambling to get out of the house, get a shower, eat food and pack my lunch,” Hannah Robbins, junior, said. “I’d get out of the house at 7:10. Now (with eLearning), I’m just getting home, taking my sweet time, getting a shower, and maybe eating some breakfast while in first hour. It’s been pretty relaxed.”

Though forced to reconcile with a whirlwind of transformation and reaction, both good and bad, students were not alone in the temporary shift to school-wide eLearning. Though MHS has now returned to the hybrid approach, feelings of alienation among teachers are still relevant.

“I feel bad for the teachers, honestly,” Bailee said. “Because they don’t get to see people. I definitely think physics is hard online. I felt sad watching Mr. (Larry) Hautzinger (physics teacher) doing the labs.”

In light of the hybrid divide returning once again, students who remain in the midst of distractions and alienating disadvantages say that a path towards a smoother end of the year begins with considering all facets of learning that online learning has affected.

“(One thing I would say to some teachers is) consider how your students are dealing with this,” Jaylin said. “I’m not saying you need to allow a lot of leisurely activity, or let them do whatever they want, but just think about what (they are) going through. We’re in the middle of a worldwide pandemic. I think that (some) teachers should stop and think, ‘Are these kids okay?’ I don’t think a lot of us tend to express (ourselves) if we feel a certain way.”