Is TikTok a community or a battleground?

Reigning in cultural phenomenons like the “Renegade” or “Blinding Lights” dance, TikTok has risen to a higher status in pop culture than many could have imagined. The app allows everyday people to create videos with an opportunity to become viral more easily than ever before.

“When I started making TikToks, I had a lot of motivation to do them,” Elena Yanef, junior, said. “I had (my) account since I was in middle school, and I had 2.9k followers.  One day I woke up and it was banned. I remember being so mad because I didn’t save anything (and) I had to make a new one.”

While the app still has some of the same components, it now has garnered respect from those who once denounced it. Through an increase in users, the app has developed different communities, known better by their respective “sides” of TikTok.

“Whenever I would overhear people talking about the different sides of TikTok, I didn’t really understand what the big deal was,” Zarah Mora, sophomore, said. “I always thought that everyone was seeing around the same types of videos I was, and this left me to wonder what side my friends or I are even on.”

There are various different sides of TikTok, the most well known being straight, alt, deep, and elite Tiktok. Within each is a large community, where many find solace in shared interests and hobbies. On the other hand, based on the app’s algorithm, many aren’t exposed to the variety of sides.

“I think the different sides of TikTok are definitely interesting,” Elena said. “I think I’m on different varieties of TikTok but on my For You page recently I have been seeing a lot of food or animal Tiktoks which I enjoy and love watching.”

While TikTok can be known for encouraging creativity and a positive atmosphere, it is also a place that can harbor negativity. With the ability to comment behind the anonymity of a screen, many creators find that their videos have more hateful comments over supportive ones.

“That app can definitely be draining with all of the negativity that it has. I have seen so many people argue in comment sections about anything and everything,” Elena said. “With this I can see it brings TikTok  and the whole community down.”

Cancel culture has been rampant on social media platforms in recent years, but with the increase in popularity of TikTok, it has become even more prominent. The app has started censoring videos to address and prevent negativity. While the censoring can be helpful, it can also be harmful.

“There’s a lot of conflicting dialogue. TikTok has a lot of social justice content, which personally I think is a good thing, but it is a heavily debated topic,” Hiba Fatima, sophomore, said. “This, I believe breeds negativity because of the trolls and sensationalists that say ignorant things. (There’s) also people that genuinely have ignorant beliefs. Those people develop toxic platforms that attack others. Everyone is looking for a “gotcha” moment (to cancel others).”

In addition to this, many on the app have pointed out the flaws within the TikTok algorithm. On top of deleting accounts and videos that are deemed inappropriate, the algorithm is responsible for boosting certain creators and leaving others without an audience for their content.

With movements like Black Lives Matter, Stop Asian Hate and more, Tiktok has censored many creators that try to help educate others and tell them what to look out for.

“I don’t like how videos with important information are suppressed and censored,” Hiba said, “especially because with big social movements. When they were initially brought on TikTok by activists and creators, they were silenced. Until the movements became too big to ignore, TikTok announced their support. It strikes me as hypocritical and performative at worst and irresponsible at best.” 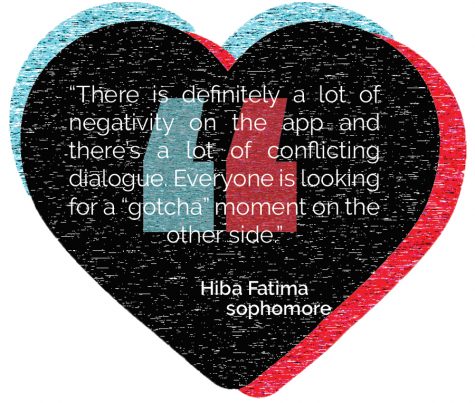